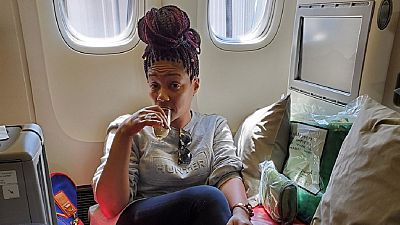 Tiffany Haddish, the American comedienne, with Eritrean roots is headed to the Asmara and she opted to make the trip aboard Ethiopian Airlines, Africa’s biggest operator.

The airline on Friday posted a photo of Haddish on board with the caption: “It’s our honour to have the renowned Eritrean – American Actress, comedian and Author, Tiffany Haddish on board Ethiopian Airlines on her way to Asmara.”

This trip will be the first this year but the second in recent times. She visited in January 2018 with some friends meeting with President Isaias Afwerki and other government officials.

READ MORE: Why Haddish is heading back home: 28th Independence

The Red Sea in Massawa pic.twitter.com/0EfpWs8goQ

Incidentally, back in January 2018 she could not have flown on Ethiopian because of a diplomatic spat that meant that flights were not operational between the two neighbours.

Flights were restarted between the two capital, borders reopened in September – even though all have been shut unilaterally by Eritrea as at April 2019, telephone lines are active and embassies have been reopened.

Haddish is known to openly gush about her Eritrean parentage and culture. In March 2018 she wore a full traditional Eritrean outfit known as the “zuria,” to the Oscars.