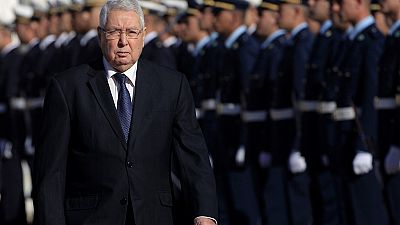 Bouteflika’s resignation, fuelled by protests that have lasted over a month, means Algeria has a new president for the first time in 20 years.

In this article, we profile the new president, who protesters have insisted is equally unfit to govern the North African nation.

It's a great responsibility that the constitution demands of me.

Bensalah is a seasoned establishment insider who has a track record of stepping in for his veteran predecessor.

Bensalah has served as a lawmaker, ambassador, civil servant and senator, but it is his role as upper house speaker which paved the way for his appointment to the presidency.

Like Bouteflika, the interim president was also a young veteran of Algeria’s independence struggle.

In recent years he has often stepped in at home and abroad for Bouteflika, who has rarely been seen in public since a 2013 stroke, last month taking Algeria’s seat at the Arab League summit in neighbouring Tunisia.

But such a close alliance with his predecessor has also seen 77-year-old Bensalah targeted by protesters, who on Tuesday gathered in their thousands in Algiers to oppose his appointment.

While his 17 years as parliamentary speaker build on a lengthy political career, Bensalah initially took a different path.

He joined an Arabic-language national newspaper and spent around a decade working for state media—including stints as a foreign correspondent—before being elected to parliament in 1977.

Bensalah’s political career also took on an international dimension. He chaired the lower chamber’s foreign affairs commission for 10 years and went on to serve as an ambassador to Saudi Arabia and a foreign ministry spokesman.

“Making himself useful at the right time is what he knows how to do, he who rarely speaks on issues related to the management of state affairs,” Algerian daily El Watan wrote in 2015.

After returning to national politics, Bensalah was nominated speaker by Bouteflika in 2002 and has been re-elected every three years since.

The holder of the position is tasked with taking over the presidency in case of resignation, death or an impediment such as long-term illness.

“It’s a great responsibility that the constitution demands of me,” Bensalah told parliament as he began his 90-day interim presidency.

On the streets of Algiers, the scale of the challenge facing him was evident as protesters chanted: “Bensalah go away!”

Despite facing tear gas and water cannon, the students continued to rally against their new president and the political system which he has served for decades.