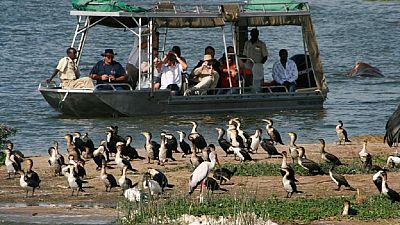 <p>Ugandan security forces have successfully rescued a kidnapped American tourist, Kimberley Sue Endecott, 35, and her Ugandan driver, Jean Paul, after they were snatched by gunmen last week.</p> <p>The local <a href="https://www.monitor.co.ug/News/National/Kidnapped-American-tourist--driver-found-alive/688334-5060930-kyo7ei/index.#MonitorUpdates" target="_blank"> Daily Monitor portal </a> cited a highly placed security source as confirming the development. The two were found at Ishasha in western Uganda near its border with the Democratic Republic of Congo.</p> <p>They were on April 2 kidnapped inside the famous Queen Elizabeth national park, close to the border with the <span class="caps">DRC</span>. Authorities had maintained that the kidnappers were within the borders of Uganda. </p> <p>A joint operation by the police, army and Uganda Wildlife Authority, <span class="caps">UWA</span> was immediately deployed with the mission to locate and rescue the kidnapped victims. </p> <p>The portal added that <span class="caps">UWA</span> spokesperson, Bashir Hangi, had confirmed that the victims had been found promising to provide further details later. There are no reports yet any arrests made in the course of the operation.</p> <p>“We are working closely with the American embassy in Kampala together with other security agencies, and we have been able to close off the border at Ishasha so that we can do internal searches and see if we can recover these people,” Polly Namaye, police spokeswoman told the media a day after the incident.</p> <p>The kidnappers who reports say were four in number had demanded $500,000 as ransom for their release, the Ugandan Tourism Board and police confirmed.</p>