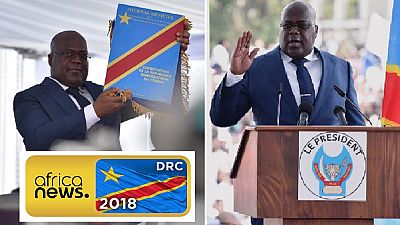 Follow our day-to-day coverage of the elections – before, during, after polls

Felix Tshisekedi was on Thursday January 24 became the fifth president of the Democratic Republic of Congo after he was sworn into office in a historic event at the Palais de la Nation in the capital Kinshasa.

Thousands of Congolese thronged the venue in an elaborate ceremony that saw a heavy diplomatic presence. The only president who joined the historic event was Kenya’s Uhuru Kenyatta. 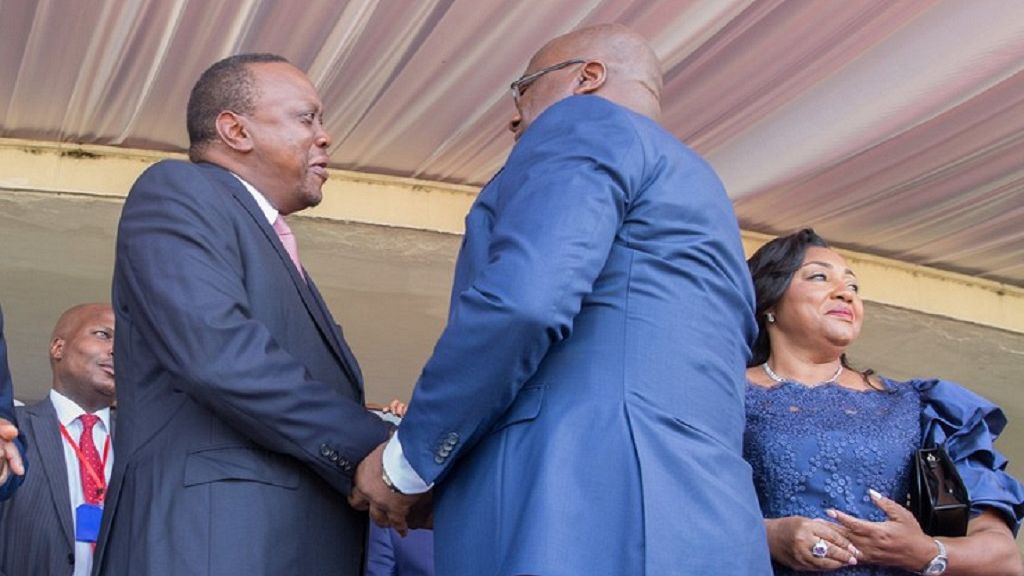 Other countries like Zimbabwe, Burundi, Namibia and Tanzania were represented by vice presidents. The African Union sent an officer from its political and security wing.

Gabon’s Prime Minister was also present with most of the remaining countries sending Ministers.

The joy was palpable around the venue as people cheered when President Kabila arrived and even more when he draped Tshisekedi in the national flag and handed instruments of office to him with an embrace amid smiles.

Kabila who barely hours to the end of his mandate addressed the nation had taken on a new look. His bushy hair and salt and pepper beard had been shaved leaving him with a thin moustache. 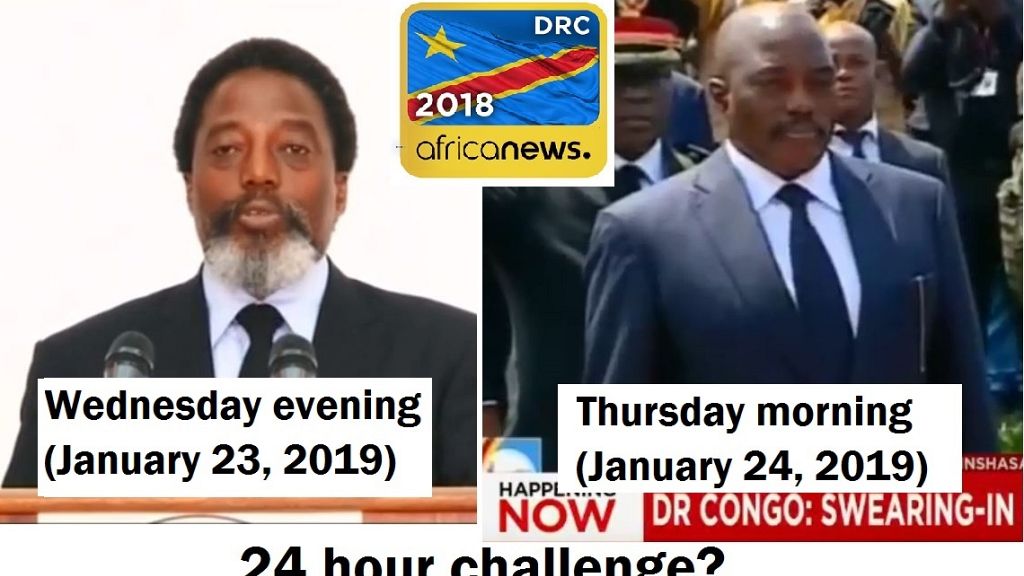 An almost half-hour pause in the new president’s inaugural address gave some cause for concern but he recovered in time to complete the address that called for unity in order to deal with pressing challenges.

The state broadcaster put the slight illness down to having overworked during the campaign and for the event. His aide however told the BBC that it was due to the tight nature of his flak jacket.

Photos from the ceremony 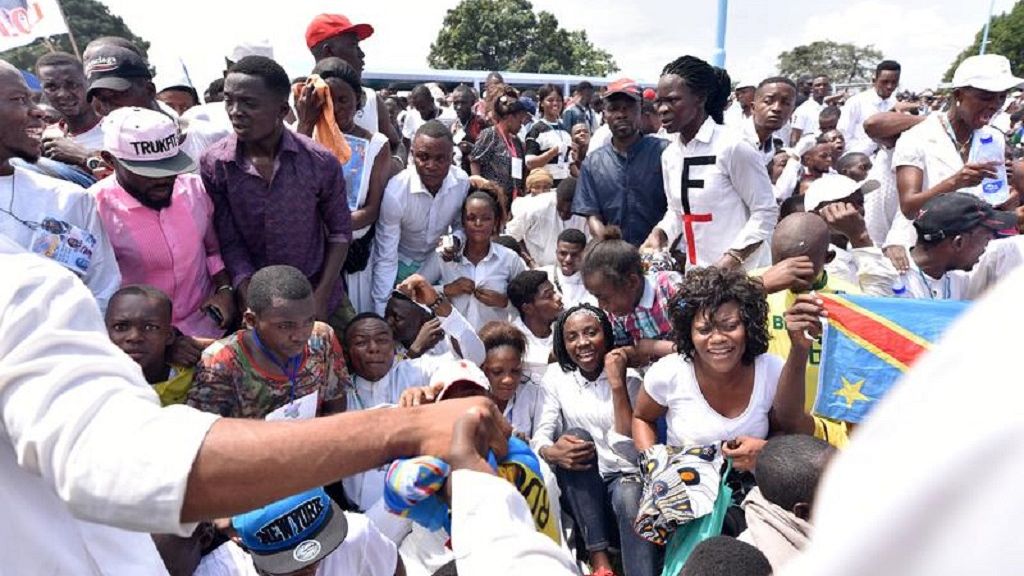 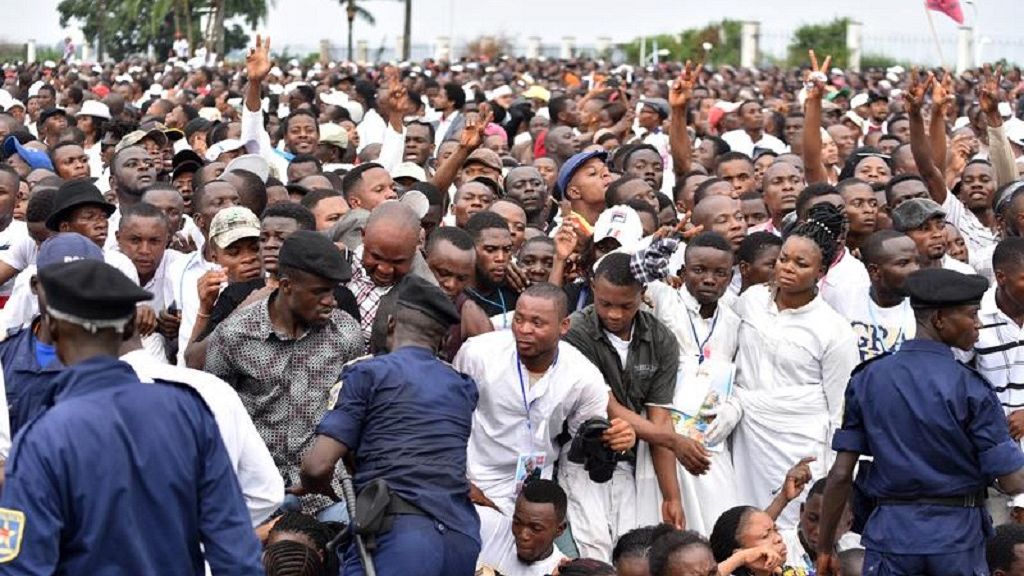 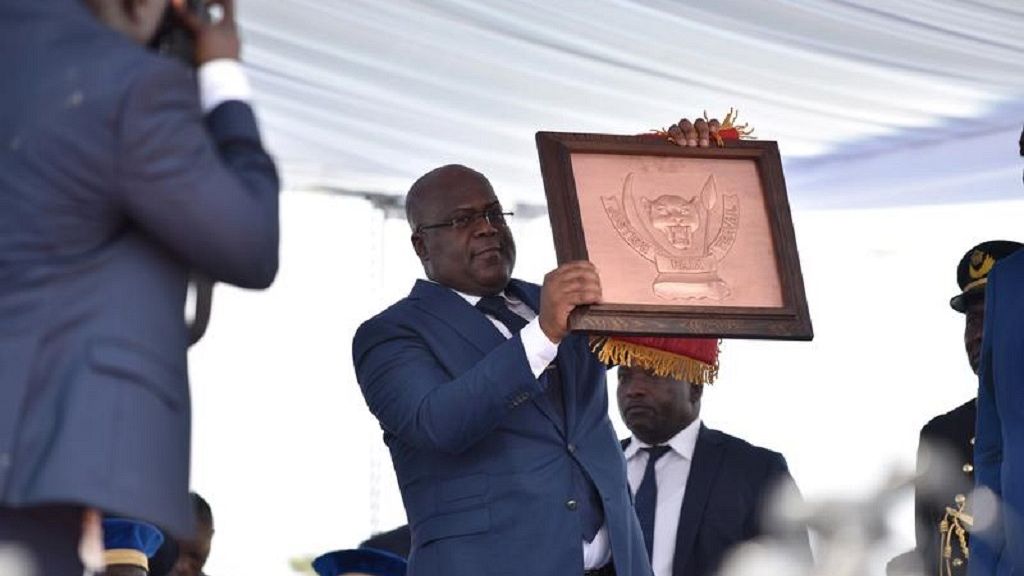 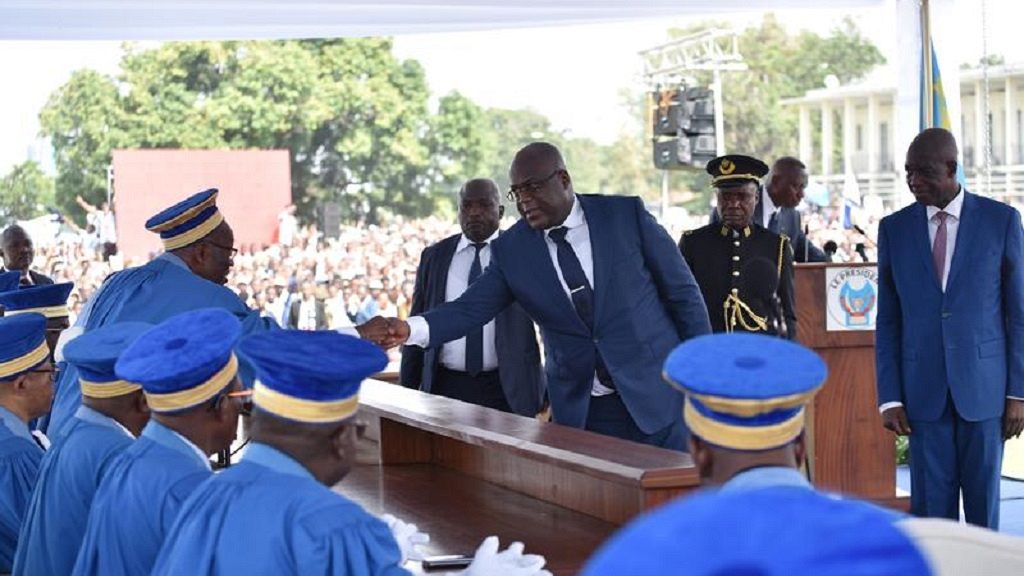 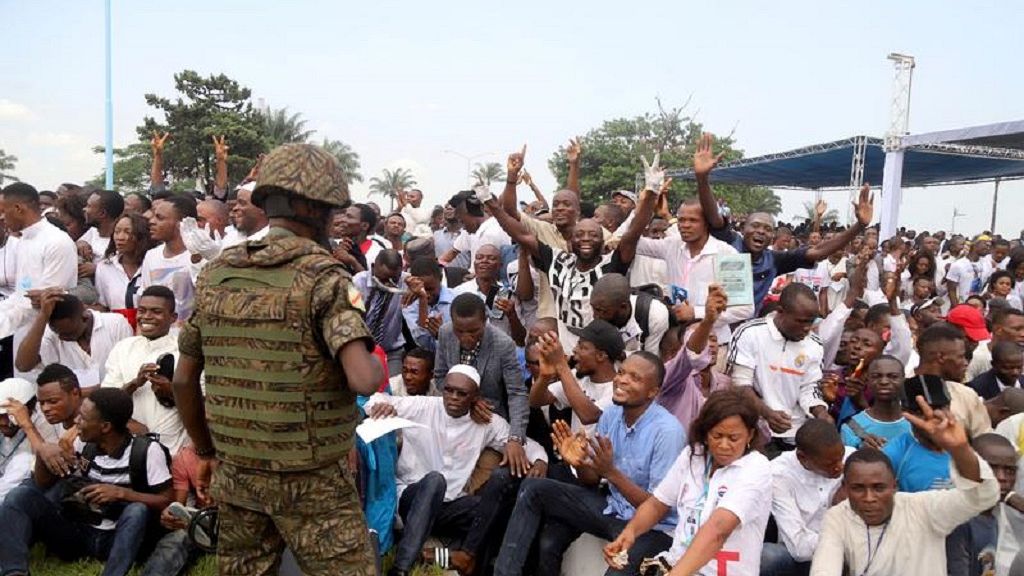 The stage is set for the first peaceful handover of executive power in the Democratic Republic of Congo, DRC. Kabila’s 18-year tenure comes to an end today as a new man takes office.

Felix Tshisekedi will take office today as the fifth president of the resource rich nation. He will be the first to be elected to office via the ballot box in the country’s history.

A number of leaders of government and representatives are already in the capital, Kinshasa for today’s ceremony. It will take place at the premises of the presidential palace.

The elections body declared Tshisekedi winner of the December 30, 2018 presidential election. The provisional declaration was affirmed by the Constitutional Court which dismissed a poll petition brought by candidate Martin Fayulu.

Rep. Chris Smith (Republican – New Jersey), immediate past chairman of the House Subcommittee on Africa, issued the following statement on Monday on a constitutional court of the Democratic Republic of the Congo (DRC) ruling that Felix Tshisekedi is the victor in the recent election:

“Unfortunately, calls for a free and fair election in the Democratic Republic of the Congo have gone unheeded by the regime of Joseph Kabila.

Independent observers have provided sufficient evidence to show that Martin Fayulu won the election, yet due to an apparent corrupt bargain between Kabila and runner-up Felix Tshisekedi, Tshisekedi is being proclaimed the victor, ratified by a constitutional court packed by Kabila.

“All parties should heed the statement of the African Union that calls for ‘the suspension of the proclamation of the final results of the elections.’ If Tshisekedi is installed this week notwithstanding the tainted results, the United States should not hesitate to apply visa denials, sanctions and other tools against those complicit in election fraud.

“Further, it is important that any protests remain peaceful and that aggrieved parties refrain from violence. All sides must ensure that their actions do not compound the suffering of the Congolese people.”

Internet was restored across the DRC on Sunday after the Constitutional Court’s affirmation of Felix Tshisekedi as president-elect.

The service was cut twenty days ago with the government defending the move as part of efforts to preserve national security. It was to avert the publication of unofficial results of the December 30, 2018 polls.

An RFI journalist covering the country also reported that the French broadcaster’s signal had been restored in the capital, Kinshasa after it was disrupted about three weeks ago without an official explanation. 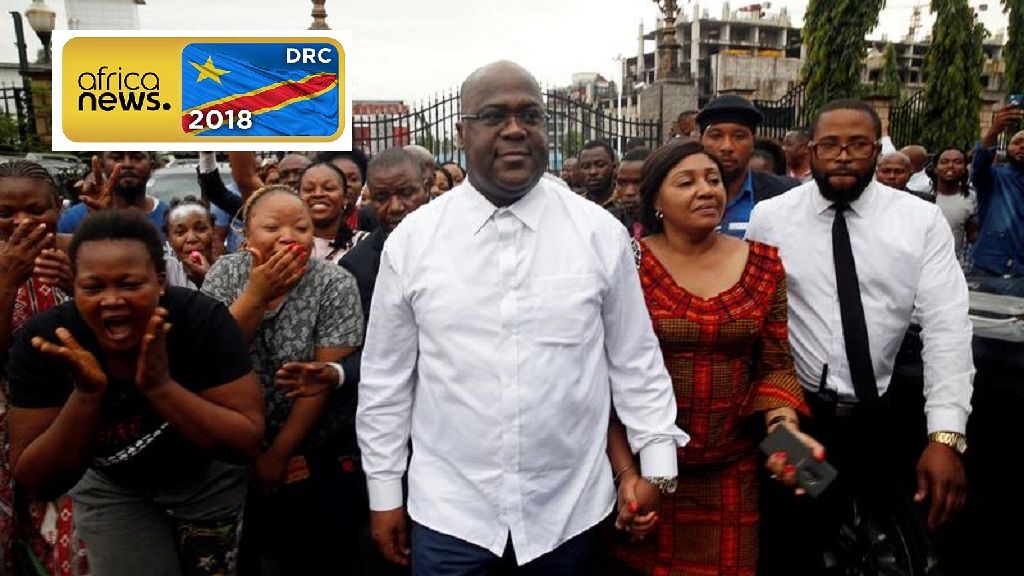 The Constitutional Court hearing the poll challenge brought by Martin Fayulu is due to issue its verdict today, the court confirmed to the AFP news agency.

Multiple sources are reporting that despite the 14:00 GMT time given for the court sitting, it is expected to start late into the evening.

There are largely three possible outcomes according to legal experts seized with the issue. An affirmation, an annulment or a call for rerun of the polls.

Fayulu’s many backers: The DRC’s president-elect Tshisekedi to AU

A fourth scenario will be the justices throwing out the case on a legal technicality. This will be akin to the first case of “endorsing” a Tshisekedi victory. 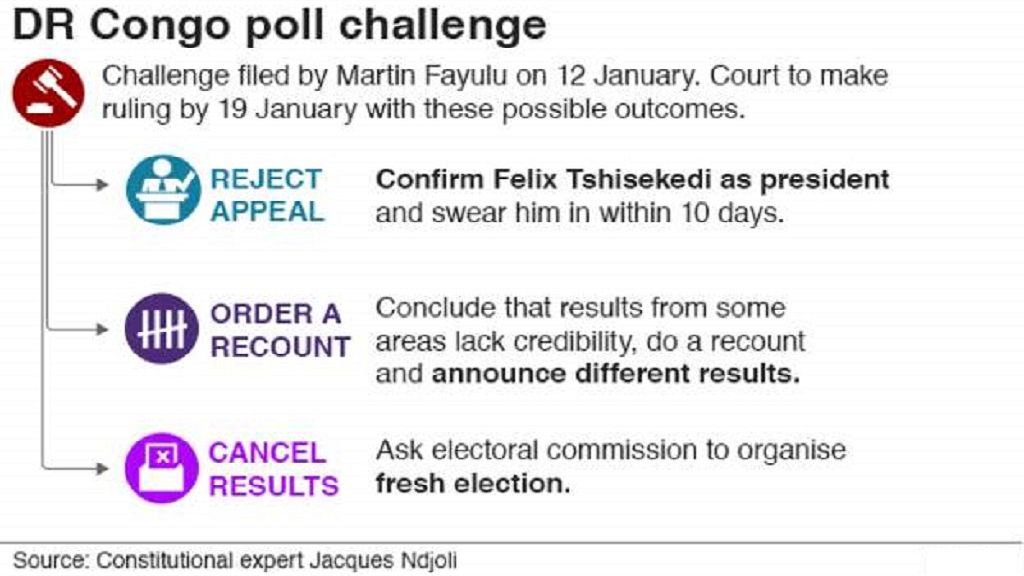 Kinshasa has rejected an African Union position that it delays the announcement of final results from its disputed presidential election, the government said on Friday.

The final tally for the Dec. 30 election, which was marred by widespread violence and fraud allegations, is to be released once the Constitutional Court has ruled on challenges to the provisional results, including from opposition leader and election runner-up Martin Fayulu.

The court’s decision is expected later on Friday or Saturday. Government spokesman Lambert Mende said on Friday that while the AU delegation was welcome, the post-electoral process would not change as Kinshasa had the sovereign right to control it. 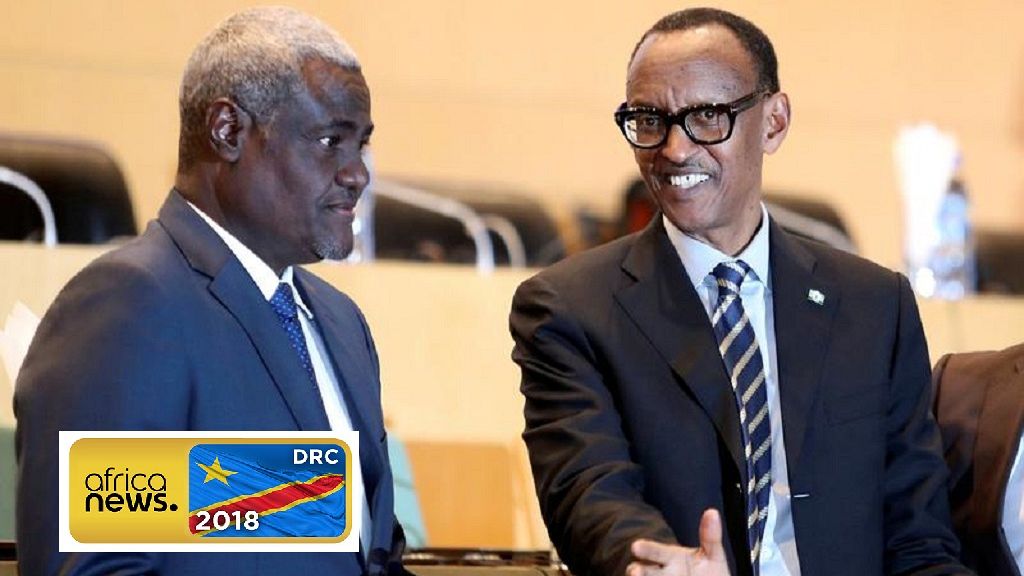 “Even if the situation on the ground has been fortunately calm so far, it obviously remains a cause for concern.

“Frankly, there are serious doubts about the compliance of the results that have been proclaimed,” these are the words of the African Union commission chief Moussa Faki Mahamat as AU and regional bloc, SADC, met over the DRC’s political impasse in the Ethiopian capital, Addis Ababa.

The elections body, CENI, declared Felix Tshisekedi winner of the poll but a fellow opposition candidate, Martin Fayulu, is in court challenging the results.

The powerful Catholic church and other independent observers have claimed the results have been rigged. The court is due to deliver a judgment soon.

The “Double Troika” refers to the application of the two levels at which the Troika System operates. #BetterAfricaBetterWorld pic.twitter.com/6fqM6AYtOb

The January 12 petition deposited at the Constitutional Court in Kinshasa is being heard as different parties make their submissions to the panel of judges on why or why not the provisional presidential results should be cancelled.

The United Nations Security Council, UNSC, after a meeting on the DRC issued a statement that largely called on Congolese to maintain a peaceful atmosphere whiles awaiting the relevant authorities to act. 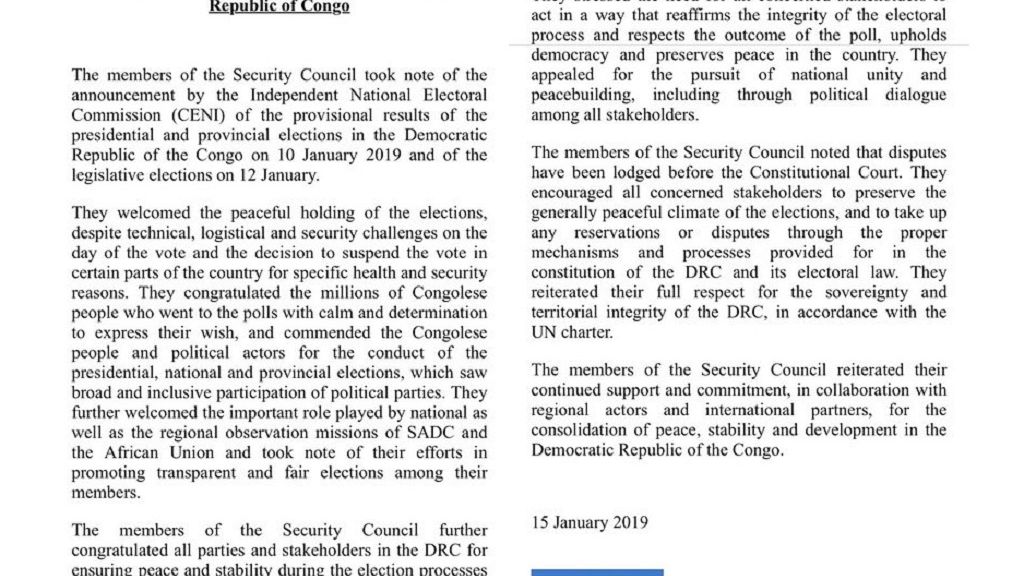 The election body has categorically rejected the petitioners case seeking to annul the December 30 polls. Reports indicate that the CACH coalition led by Felix Tshisekedi could apply to join the case and ask that the CENI’s declaration be respected.

The results have been flatly rejected by the Catholic Church whiles France, Belgium, United Kingdom and United States have called for release of detailed result tallies.

On their part, the regional blocs, SADC and ICGLR have advocated the need for a recount of votes to assure winners and losers that the process was clean and not tampered with. 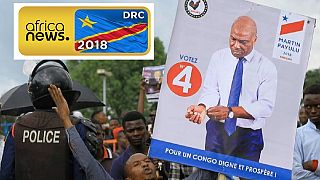 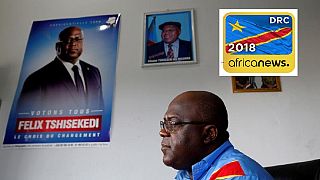