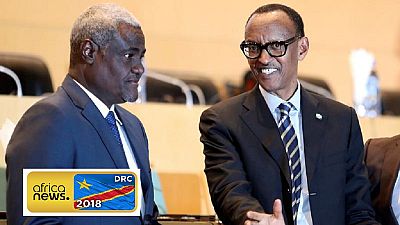 The African Union, AU, on Thursday urged authorities in the Democratic Republic of Congo, DRC, to suspend the final publication of results from its presidential elections.

AU said its appeal was because of serious doubts over the process that led to the January 10, 2019 declaration of Felix Tshisekedi as president-elect by the elections board, CENI.

The continental bloc in a statement after high-level consultative meeting held on Thursday in Addis Ababa also presented a roadmap on how they planned to help resolve the current crisis.

“The Heads of State and Government attending the meeting concluded that there were serious doubts on the conformity of the provisional results, as proclaimed by the National Independent Electoral Commission, with the votes cast.

“Accordingly, the Heads of State and Government called for the suspension of the proclamation of the final results of the elections,” a communique read in part.

A key measure the AU is seeking to deploy is a visit to the DRC by a delegation led by Rwandan president and other heads of state: “… to interact with all Congolese stakeholders, with the view to reaching a consensus on a way out of the post-electoral crisis in the country.”

No specific timeline has been given as to when the visit is due to take place.

The meeting which was attended by all sub-regional continental blocs – SADC, ECOWAS, ICGLR, EAC, IGAD ECCAS – urged all concerned actors in the DRC to interact positively with the high-level African delegation in the interest of their country and its people.

The Constitutional Court sitting in the capital Kinshasa is expected to deliver a judgment on a poll petition challenging the provisional results declared. Opposition leader Felix Tshisekedi is hoping to have the results overturned.