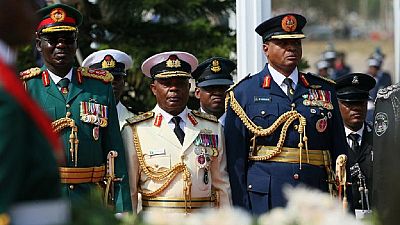 The Nigerian Army is one of the continent’s busiest, at least its troops on the ground and to a large extent its air contingent – the Nigeria AirForce, NAF.

Aside the relentless Boko Haram insurgency that continues to ravage the northeastern Borno State, 2018 brought more responsibilities in the midst of communal clashes and armed banditry in parts of the country.

The army has been prosecuting a combat on ground but its activities has also been crucial in traditional media outlets and online – Facebook and Twitter.

The Army has in the course of its war with Boko Haram entered different level of combat with groups that could be described as ‘stakeholders’ in the Boko Haram fight.

Among others, journalists and media houses, human rights groups – especially Amnesty International and even humanitarian aid agencies with the United Nations.

The most recent case is of the raid on the Abuja and Maiduguri offices of the popular media outlet, Media Trust. Soldiers arrested two journalists and carted away computers, Daily Trust confirmed.

For its part, the army claimed that the newspaper compromised national security by publishing details of future operations against Boko Haram insurgents. The government intervened with an order to the military to vacate the offices.

Adding, this information had given the insurgents an “early warning” which has consequently “sabotaged their planned operations… putting the lives of the troops in danger.”

The Army in mid-December 2018 announced a three-month ban on the operations of United Nations Children’s Emergency Fund, UNICEF, in Borno State.

They accused the aid agency of training “spies” supporting Boko Haram terrorists. The military claimed that UNICEF had held workshops in Maiduguri training people for “clandestine” activities that were “sabotaging” counter-terrorism efforts.

It only took an intervention by well meaning and concerned Nigerians and a meeting between the two parties before the ban was lifted.

“During the meeting, the Theatre Command admonished the representatives of the organisation to desist from activities inimical to Nigeria’s national security and capable of undermining the ongoing fight against terrorism and insurgency.

“The Command also urged Unicef representatives to ensure they share information with relevant authorities whenever induction or training of new staff is being conducted in the theatre,” a military spokesperson said.

Many critics of the ban deplored the move which was certain to affect people in need of humanitarian assistance having been displaced by the terrorist activities.

The army reacted via Brigadier General John Agim, its director of military information who called for the group to be banned from the country.

“We have an international NGO that describes us as uncivilized people who do not know how to take care of their own people. Amnesty International brings nothing to our country, they don’t belong here,” he said.

The NGO, however, flatly denied any intentions to run down the government and stressed that its findings are legitimate.

Osai Ojigho, president of Amnesty International Nigeria said: “These attacks are used as a tactic to make people look away from the real problems we face, I do not think the military has the power to close the an organization’s offices.

“If Amnesty International were to close its doors, it would send a very negative message to the international community,” he added.

The Army and Amnesty sparring over reports go way back. In June 2016, after the release of a report on an army clampdown on pro-Biafra group, IPOB, the two clashed over death figures.

An army statement at the time read: ‘‘It should be noted that the Non-governmental organization has always been of the habit of being the judge and jury in matters of our national security without recourse to fairness, objectivity, all aimed at rubbishing the Nigerian Army for reasons best known to them. This could not be far from trying albeit unsuccessfully to be relevant and justify funding,’‘ an official statement read.

Ahmed Salkida, a journalist famed for his reportage on the Boko Haram crisis also had an encounter with the army in 2016.

He was declared wanted by the Army in August 2016 at a time that he was out of the country. The arrest warrant also covered two other persons the army said could have information on the Chibok Girls abducted by Boko Haram in 2014.

He returned to Nigeria in early September and submitted himself to the authorities even though media reports said he had been arrested immediately he arrived in Abuja.

Salkida remains by far the most respected reporter and analyst of the Boko Haram crisis that continues to ravage the wider Lake Chad region – northern Nigeria and Cameroon, Niger and Chad.

Boko Haram’s insurgency has killed more than 27,000 people since it began in 2009 and has triggered a humanitarian crisis in the wider Lake Chad region, where the terrorists have stepped up attacks in recent months.

The bloody uprising in northeastern Nigeria has spread to its neighbours, leaving 1.8 million people homeless and millions dependent on aid for survival.

Nigeria’s President Muhammadu Buhari, who came to power in 2015 pledging to end the violence, is under increasing pressure to act as he gears up to seek re-election in a February ballot. He has come under attack for previously claiming the Islamists were “technically defeated”.