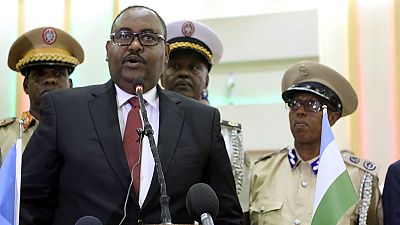 <p>One of Somalia’s semi-autonomous regions on Tuesday witnessed a peaceful transfer of power, following a hotly contested presidential election that ousted the incumbent Abdiweli Mohamed Ali Gaas in the first round of voting.</p> <p>Said Abdullahi Deni, who is likely to continue Puntland’s close cooperation with the United States, defeated his closest rival, Asad Osman Abdullahi. He was sworn in for a new five-year term.</p> <p>Deni has taken a hardline against the Islamist militant group al-Shabaab and a rival splinter faction that has pledged allegiance to Islamic State, said Matt Bryden, head of the Nairobi-based think tank Sahan Research.</p> <p>“He has campaigned as a reformist, promising to strengthen government institutions, fight corruption and stabilise the economy,” Bryden said.</p> <p>A former Somali federal minister for planning, Demi won 35 votes out of the 66 lawmakers that voted, the speaker of Puntland’s parliament, Abdihakim Mohamed Ahmed, said.</p> <p>He replaces the incumbent Abdiweli Mohamed Ali Gaas, who served a single term and was eliminated in a first round of voting.</p> <h2 style="font-size:16px;">About Puntland</h2> <p>Puntland, on the tip of the Horn of Africa, has an often tense relationship with the federal government of Somalia.</p> <p>Six years ago, it was a hotbed of piracy, and hundreds of attacks cost the shipping industry billions of dollars.</p> <p>But a combination of maritime patrols, stronger Somali security forces and better security protocols by mariners mean attacks are now rare.</p> <a style="font-size:16px; font-color:yellow;" href="http://www.africanews.com/2018/10/26/somali-states-to-dedicate-1000-soldiers-each-in-al-shabaab-combat/"target="_blank"><span class="caps">SUGGESTED</span> <span class="caps">READING</span>: Somali states to dedicate 1,000 soldiers each in Al-Shabaab combat</a>

He has campaigned as a reformist, promising to strengthen government institutions, fight corruption and stabilise the economy.