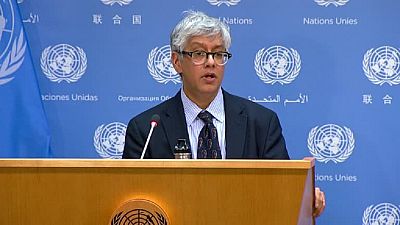 The United Nations will appoint a new envoy to Somalia, following the expulsion of the Special Representative of the U.N. Secretary-General in that country.

Guterres spoke by phone with President Mohamed Abdullahi Mohamed on Friday, his second call to the Somali leader in three days, to once again urge him to change his mind, according to diplomats.

But the president dug in his heels and said Haysom would remain persona non grata and would not be allowed to return to Somalia, diplomats told AFP.

The UN Security Council met behind closed doors to agree on a response to Somalia’s decision.

But during that meeting, China asked for more time to consider a draft statement put forward by Britain that expressed regret at the decision, diplomats said.

The council was to reconsider its response on Saturday.

In the British-drafted text, the council would express its support for the UN mission in Somalia and say it expects Somalia to fully cooperate with the United Nations.

Haysom, a South African lawyer and experienced diplomat, was told to leave Somalia on Tuesday after he questioned the government’s decision to arrest an Al-Shabaab defector who was running in elections.

Haysom, who took up the post of UN envoy in October, warned the council during a meeting on Thursday of a risk of conflict during elections in Somalia’s federal states due to tensions with the central authorities.

The arrest of Robow could discourage other Al-Shabaab militants “who may be considering exchanging violence for a political path,” said Haysom.

Somalia’s Ambassador Abukar Dahir Osman told the council that the United Nations should not interfere in his country’s national affairs.

Former Al-Shabaab militants “cannot assume leadership positions without going through stringent established rehabilitation programmes,” he said, adding that a terrorist should not be allowed to rebrand himself as an “ice cream salesperson.”

The UN mission in Somalia is tasked with supporting peace efforts and the strengthening of government institutions in the Horn of Africa nation, which were ruined by decades of civil war.