Police in Zimbabwe have revised the death toll in a bus crash on Wednesday stating that forty-seven people were killed in the incident.

Fourty five of the victims were adults whilst two children were also killed. They died on the spot in Zimbabwe when two buses collided in the town of Rusape in the country’s northeastern Manicaland Province.

According to the state broadcaster, Zimbabwe Broadcasting Corporation, ZBC, report; scores others were injured in the crash that happened close to a tollgate on Wednesday.

It also quoted a Police Spokesperson, Assistant Commissioner Paul Nyathi as confirming earlier that so far 30 bodies had been identified at the accident scene.

Police have confirmed the death of 47 people, 45 of which are adults and 2 children. The pictures are too graphic and have been censored

Photos from being shared on social media shows bodies on the road with the cars said to have gotten into a head-on collision on either sides of the road. Remnants of the crash have also blocked the road.

A district commissioner has since confirmed with state-media that the main mortuary in the area had been overwhelmed by the incident and that authorities had called for private assistance.

“They are engaging Nyaradzo Funeral for assistance,” the Herald Newspaper said in a tweet. Meanwhile, a deputy minister has tweeted condolences.

The accident that has claimed lives in Rusape is very sad and shocking. We have lost our loved ones and we must mourn as a nation. This is a dark day for #Zimbabwe. May they all rest in peace. 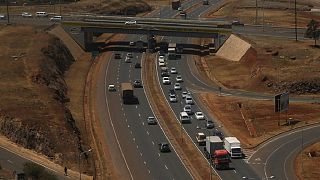