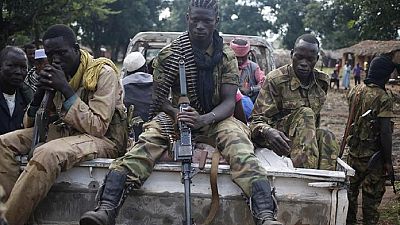 Blanket amnesty, renegotiating military deals with Russia and restructuring the army are among the several demands that armed groups in the Central African Republic have presented to an African Union expert panel seeking to broker peace in the country.

An AU document, seen by AFP, lists 97 demands by the armed groups in return for peace, with a government of national unity required along with the amnesty and a restructuring of the army.

The African Union has been leading a peace process in the Central African Republic but there has been little progress.

CAR descended into violence in 2013 following the ouster of the majority-Christian country’s president, Francois Bozize, by a coalition of Muslim-minority rebel groups called the Seleka.

In response, Christians, who account for about 80 percent of the population, organised vigilante units dubbed “anti-balaka.”

France intervened militarily to help force out the Seleka before handing on to a UN peacekeeping mission.

However, the central government remains very weak, with its authority largely confined to Bangui, and violence has led to thousands of deaths.

According to a diplomat in Bangui, representatives of each armed group are expected to meet with the AU panel in the western town of Bouar on Monday to seek to “harmonise” their demands, before submitting the final list to the authorities.

But the government has so far refused to accept any conditions for the cessation of hostilities.

Another demand received by African Union experts is a review of military deals between the CAR and Russia.

Moscow has had a high diplomatic presence in the country in recent months and is seeking to organise a parallel mediation meeting on Saturday in the Sudanese capital Khartoum, according to sources.

CAR spokesman Ange-Maxime Kazagui on Monday denied any government involvement in those talks and reaffirmed Bangui’s strong support for the African Union mediation.

Backed by the United Nations and the Central African Republic’s main partners, the African panel has also met with former presidents Michel Djotodia, in Benin, and Francois Bozize, in Uganda.

There have been numerous attempts at mediation in CAR since the start of the crisis, and seven peace deals have been signed, without any sign of calm being restored.