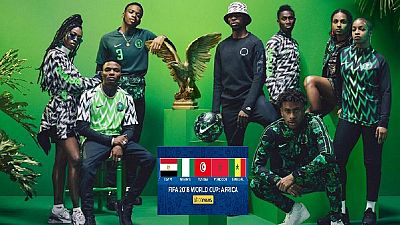 Fans of the World Cup bound Nigerian team are celebrating the latest cheerleader to come on board in the form of a video commercial by soft drinks company, Pepsi.

The video which is doing the rounds on several social networking sites features players from the Nigerian football team and prominent Nigerian celebrities including pop stars Wizkid, Davido and Tiwa Savage.

In a campaign dubbed #NaijaAllTheWay speaks of a Naija Spirit that can not be defeated even when Nigerians lose. The artists and footballers proudly thump their chests in a salute, almost similar to the now famous Wakanda salute from Black Panther.

The Super Eagles on Saturday lost a friendly game against England that seemed to deflate the hype that had been fuelled by sales of three million jerseys on Friday.

Nigeria’s goalscorer in the game, Alex Iwobi is featured in the video, alongside another star player, Victor Moses, and the legendary Jay Jay Okocha.

Goosebumps! Pride! Football buzz! Nigeria is not playing with this World Cup! This video captures everything! The Naija salute, the superstars who are leading Naija’s soft power export, the whole Naija pride! Let’s go!!! #NaijaAllTheWay pic.twitter.com/T5vDWYwzUy

You see, when people ask me what the Naija spirit is, I tell them about Wizkid going from Ojuelegba to the world knowing his story. I tell them about Davido who works like he is upcoming and broke when his father is a billionaire.