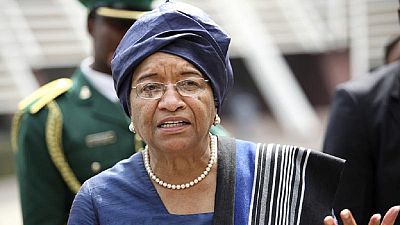 <p>African leaders resisting “democratic transformation” must heed their citizens’ calls for change, former Liberian President Ellen Johnson Sirleaf said on Saturday after receiving an award aimed at promoting good leadership on the continent.</p> <p>Without naming specific countries or leaders, she referred to “laggard” countries in the region of one billion people who are “not meeting democratic transformation”.</p> <p>“Their own citizens are making the call for change and I don’t think they can continue to resist or deny that call for change,” Johnson Sirleaf told Reuters after accepting the award in Rwanda’s capital Kigali.</p> <p>Long-serving African leaders who have changed the law to stay in power include Ugandan President Yoweri Museveni, 73, and Cameroon’s President Paul Biya, in power for 35 years.</p> <p>Johnson Sirleaf was awarded the 2017 Mo Ibrahim award, designed to improve the quality of African political leadership, after handing over power in her West African country’s first peaceful democratic transition in seven decades.</p> <p>“The pressure builds (for democracy),” she said. “The young people today are educated, skilful, demanding, and eventually we have to listen and I think that will happen to all those that are still lagging behind.”</p> <p>Africa’s first elected female head of state, and a Nobel Peace Prize laureate, Johnson Sirleaf stepped down as president of war-scarred Liberia last month, making way for ex-international soccer star George Weah.</p> <p>She is only the fifth person to win 10-year-old Ibrahim Prize for Achievement in African Leadership, founded by Sudanese telecoms tycoon Mo Ibrahim, which has several times not been awarded for lack of a suitable candidate.</p> <p>The prize is $5 million paid out over 10 years, with another $200,000 annually throughout the winner’s lifetime.</p> <p>Johnson Sirleaf, a former World Bank and United Nations official, said this was unsurprising because many African nations do not meet the Foundation’s high standards.</p> <p>“Democracy is now moving at a fast pace but it hasn’t got everybody yet,” she said in an interview.</p> <p>“And even in stated democracies there is not enough … democracy in the sense of full competition, full support for those that have been marginalised from the political scene.”</p> <p>But Africa continues to change.</p> <p>In Burkina Faso, Blaise Compaore was ousted by protests in 2014 after he tried to amend the constitution to extend his decades-long rule, while Gambia’s ruler Yahya Jammeh fled after regional pressure ended his 22-year reign last year.</p> <p>Johnson Sirleaf said she was optimistic about recent transfers of power on the continent.</p> <p>Earlier this month, Ethiopia swore in a new prime minister after Hailemariam Desalegn quit to clear the way for reforms.</p> <p>In Zimbabwe, 94-year-old Robert Mugabe stood down as president in November, after the army and former political allies turned against him, ending nearly four decades of rule marred by allegations of corruption, human rights abuses and economic negligence.</p> <p>Zimbabwe is due to hold elections in July.</p> <p>Johnson Sirleaf defended her record in Liberia, saying her much-criticised efforts to fight corruption were hindered by a “culture” of graft “developed for many years of deprivation through conflict.”. </p> <p><strong><em><span class="caps">REUTERS</span></em></strong></p>

The young people today are educated, skilful, demanding, and eventually we have to listen and I think that will happen to all those that are still lagging behind.