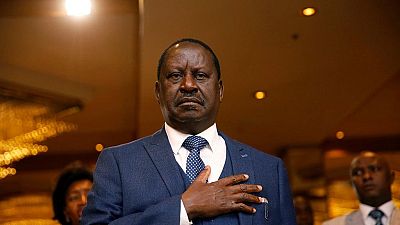 Fruits of the surprise handshake between Kenya’s president Uhuru Kenyatta and opposition leader Raila Odinga have started to emerge as the latter travelled to South Africa for Winnie Mandela’s funeral as an official representative of the Kenyan government, his office said.

Less than a year since Kenyatta was re-elected to a second and final term in a vote that Odinga called a farce, the two shook hands on March 9 after weeks of secret talks.

While details of the truce were scant, it has had impact on the political scene in the country and opened up debate on the Uhuru succession question, come 2022.

Odinga is on this visit in a more official capacity, officially representing the Kenyan State and all the Peoples of the Republic of Kenya

The trip to South Africa where Odinga was treated as Kenya’s representative by the government and accorded private talks with top ANC leaders, demonstrates that Odinga’s role within the Kenyatta led government is slowly growing.

‘‘Odinga is on this visit in a more official capacity, officially representing the Kenyan State and all the Peoples of the Republic of Kenya,” his aide Silas Jakakimba, said in a statement.

Effect of handshake on 2022 politics

While the handshake between Kenyatta and Odinga was hailed as a means to end the violence, bitterness and political instability that followed last year’s elections, analysts say the handshake could have threatened the ambitions of Kenya’s deputy president William Ruto.

“This pact between Kenyatta and Odinga has redefined the race as everybody has had to go back to their drawing board and decide how they are going to run in 2022,” said Ngunjiri Wambugu, a lawmaker from Kenyatta’s Jubilee party, a political alliance between his Kikuyu ethnic group and Ruto’s Kalenjin.

Political victory in a country of 45 million with 44 ethnic groups is usually forged through ethnic alliances. Since independence in 1963, Kikuyu and Kalenjin have dominated government.

The Luo and other groups have often felt excluded by central government and made their own NASA alliance, led by Odinga.

Tensions between the Kikuyu and Luo groups contributed to a dispute between Kenyatta’s father and the founding president, Jomo Kenyatta, and his vice president and Odinga’s father Oginga Odinga, in 1969. That set the stage for years of bitter rivalry between the two powerful families.

The Jubilee alliance was also forged on the premise that the populous Kikuyus and Kalenjins would stick together to lock out Odinga or other opposition challengers.

The Kalenjins may be upset if Kenyatta does not let Ruto take the helm of the alliance with a view to the presidency in 2022.

Ruto declined requests for an interview but his allies dismissed suggestions that his presidential prospects have taken a knock.

“Those are people who don’t know William Ruto. He is a very strategic and experienced politician,” said national assembly majority leader Aden Duale.

The 73-year-old Odinga, a former prime minister, has run unsuccessfully for president four times and is not expected to run again.

A visit by Odinga to retired president Daniel Arap Moi at his Kabarak home further rocked the boat as Ruto’s camp and other NASA leaders were forced to think of another possibility.

Could Odinga endorse Moi’s son, who is currently a senator and chairman of KANU political party, Gideon Moi?

Kenyatta could also be asked to back Moi, the seasoned politician and senator from the sizeable Kalenjin community, whose father made Kenyatta his protege.

The opposition expects Odinga to back one of the other NASA co-principals as per the agreement before the 2017 elections, while Ruto’s camp expects Kenyatta’s endorsement for 2022.

“Kenyatta has pulled the classic divide-and-rule move of the cunning president, creating as many potential alliances as possible in order to avoid empowering any one successor,” said Nic Cheeseman, professor of democracy at the University of Birmingham.