Suspected jihadist questioned as investigations into B. Faso attacks kick off 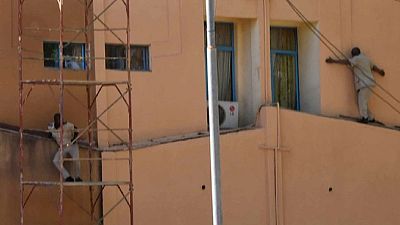 A man suspected of having participated on Friday in the attack on the army headquarters in Burkina Faso, has appeared before a court in the capital, Ouagadougou, a government source told AFP.

He could even be “a brain” of the attack, according to this source, who added that there are “very strong suspicions” that there were “infiltrators in the army” who coordinated the attack.

The suspect in question was arrested on Friday in the hours following the double attack on the headquarters and the French Embassy in Ouagadougou.

A final assessment given by the same government source showed that seven members of the security forces were killed, nine assailants neutralised and more than 80 people were left injured from the attacks.

Nine jihadists were killed by law enforcement during the attacks that have since been claimed by Al Qaeda affiliate Jama’a Nusrat ul-Islam wa al-Muslimin (JNIM).

AFP also learnt that on Saturday during the night, three individuals unsuccessfully attempted to storm through a roadblock in the zone of the Burkina Faso presidency, on the outskirts of Ouagadougou.

Presidential security guards who were manning the roadblock about 1.5 kilometers from the presidential palace, repelled the attack, arresting one assailant while two managed to escape.

The arrested man was later shot dead around 0400 hours in the morning after attempting to seize the weapon of one of his guards, according to the same source.