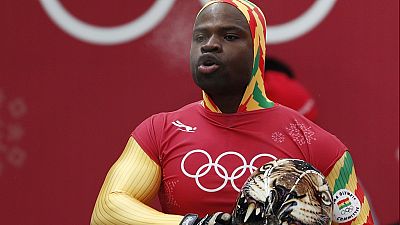 Should Akwasi Frimpong by the strangest twist of events, decide not to compete in the 2022 Winter Olympic Games in Beijing (which I strongly doubt), he would have at least, fulfilled a part of what appears to be his two-fold mission.

As a Ghanaian athlete venturing into unfamiliar sports territory, the now world famous Frimpong, went into the just-ended winter games in PyeongChang, South Korea, with a carefully thought out agenda.

“My goal has always been the 2022 Olympics in Beijing where I want to be competitive and win a medal for my country Ghana,” Akwasi said via correspondence with Africanews’ Nii Akrofi Smart-Abbey.

... to write history for my country Ghana and to be the first ever to go headfirst in the sport of skeleton and to help people in my country to come out of their comfort zone and to dare to dream...

Born in a West African country which has never had snow and is rather big on football in terms of sports, the 32-year-old athlete knew PyeongChang was going to be a tough call.

But that did not deter him from pursuing a dream he had chased for so long – to become an Olympian. And he became more than just an Olympian. He was one of the few athletes who stole the hearts of millions of spectators.


These people didn't win gold medals at the 2018 Winter Olympics. They won the internet instead https://t.co/8qv0pXnsm5

Akwasi Frimpong, one of very few athletes to have switched from a sport in the summer games to one in the winter qualified for the 2018 Games in January 2018.

“When I heard that I’ve qualified for the 2018 Olympics I was very excited but mostly emotional,” he recalls of the day he got confirmation that he had to greenlight to compete in the 23rd winter games in South Korea.

“It was about 4am in the morning. Finally my 15-year dream was becoming a reality, something I had waited for, for so many years.”


A moment I will cherish the rest of my life. #Ghana to the world. Let the games begin! #DaretoDream! pic.twitter.com/6eQEhoIxLb

Akwasi is a highly decorated sprint athlete and former Dutch National junior champion with 8 gold, 4 silver and 4 bronze medals from various competitions in the Netherlands and internationally. In spite of these successes, one thing was missing.

“I remember in July 2015, my wife noticed that there was something not going right with me, something wasn’t feeling right,” he said of the restlessness he felt for not having made it as an Olympian.

My wife then told me this message. ‘Akwasi I don’t want you to be 99 years old and still be whining about your Olympic dream so let’s go for it’,” and that is how come he ended up in PyeongChang.

Once he overcame the many hurdles (battling for 13 years to regularise his status as a legal migrant in the Netherlands, suffering a career threatening ankle injury among others) from his past, the former Dutch junior champion came up with a strategy for PyeongChang.

“For the 2018 Olympics, I set for myself 3 goals. One, to break barriers and to show that people from warm countries and black people can do the sport as well. Number two was to write history for my country Ghana and to be the first ever to go headfirst in the sport of skeleton and to help people in my country to come out of their comfort zone and to dare to dream and number three was to gain the necessary experience for the 2022 Olympics, which I feel I have accomplished all these 3 goals,” he said.


You followed your dreams and that serves as an inspiration to many not to give up. Shine on. https://t.co/QUoo1rmH5C

Going by his set targets, it is safe to say he masterfully executed the first two, what remains though is the third target which is to get Ghanaians to dare to dream and step out from their comfort zone.
Akwasi Frimpong is the second Ghanaian ever to compete at the Winter Olympic Games after Kwame Nkrumah-Acheampong, a UK-born Ghanaian who competed at the 2010 Winter Olympics in Vancouver, Canada.

The pioneering Ghanaian winter Olympian, Kwame Nkrumah-Acheampong, nicknamed the Snow Leopard, was a skier who competed in the men’s slalom (Alpine skiing) while Akwasi Frimpong is a bobsled and skeleton athlete who made his Olympic debut as a skeleton athlete.

The 4-year plan targeting the Beijing games means Akwasi and his team at the foundation have their work cut out for them if they are to get more athletes in shape for the 2022 games.
And Akwasi knows this all too well as he had just about 2 years to prepare for the PyeongChang games.

His plan is thus: “Every 3 months, we organize bobsled and skeleton clinics in Ghana with wooden sleds which I pay (for) out of my own pocket to keep introducing the sport”.

Much as he’s investing in making the sport of bobsled and skeleton popular and acceptable to many young Ghanaians in particular, Akwasi says he cannot do it alone.

“To really build a sport program, we will need the support of sponsors and the Ghana sports bodies,” he explained.

His own journey to the Olympic Games had had its fair share of hurdles.

“When I started with the sport of skeleton, I reached out to a lot of companies around the world, none of them really wanted to invest and support me in my journey to the Olympics.”
It was pretty obvious to Akwasi why the corporate organisations were not responding favourably to his appeal for sponsorship.

“I had missed the Olympic Games twice and of course I was an athlete from Ghana trying to do something that nobody from my country has done before,” he explained.

“Therefore I had to go out there and sell vacuum from door to door from 8am to midnight to make enough money to pay for my first season to show to these companies and to show to people around me that I was serious about the sport and I really wanted to accomplish something great.  Grateful that in 2017, 2018 more companies joined me in making history.”

Akwasi indeed made history but it was not limited to Ghana. Two other countries on the continent, Nigeria’s first ever female bobsled team and Eritrea’s first ever Winter Olympic athlete, all contributed to the history making process.

With the new debutants, Africa had its largest representation yet at the 2018 Winter Olympics since it was first represented in the 1960 Winter Games in California, USA by a whites-only team of figure skaters from the then apartheid South Africa.

All these gains have been made in spite of the absence of snow conditions in the vast majority of African countries. It is worth noting though that most of the African athletes who have competed at the Winter Games have either been born and bred outside the continent or currently live and train abroad.

But with Akwasi Frimpong’s plans of grooming home talents, one can only hope that soon, a new generation of African winter athletes will emerge and be based on the continent. And with the advancements in technology, it should be possible to create artificial winter conditions for these athletes to thrive. 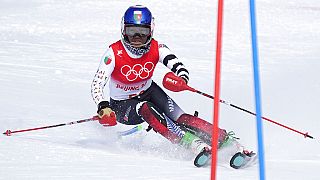