<p><strong>Despite an international outcry for the release of two Reuters journalists Wa Lone and Kyaw She Oo, who were arrested last month on accusations of breaching the British Colonial-era Official Secrets Act, a Myanmar court procedure against them has been pushed ahead as the latest hearing to decide on their requests for bail will take place on Wednesday (February 21).</strong></p> <p>On December 12, Wa Lone and Kyaw Soe Oo were held in custody as Myanmar police claimed that they had breached the nation’s Official Secrets Act minutes just after being handed an enveloped document, according to their lawyer.</p> <p>Their lawyer, Than Zaw Aung, who has been retained by Reuters, said the two had only been doing their job as journalists.</p> <p>The two journalists had worked on Reuters coverage of a crisis in the western state of Rakhine, where an estimated 655,000 Rohingya Muslims have fled from a fierce military crackdown on militants.</p> <h3>Wa Lone</h3> <p>Wa Lone, 31, grew up in Kin Pyit, a village of some 400 households in the Shwe Bo district north of Mandalay, on Myanmar’s dry central plain between the mighty Irrawaddy and Chindwin rivers.</p> <p>One of five children, his parents were rice farmers and there was little money. His mother died from cancer when he was young.</p> <p>But he was a good student, according to friends and family, and took a keen interest in news reporting from an early age.</p> <p>In December 2010, having saved a little money, the brothers moved back to Yangon, where Wa Lone could pursue his boyhood dream. Living in North Okklapa township, near the city’s airport, they re-established their photo services business, while Wa Lone also enrolled in a media training school and later began taking English classes.</p> <p>Within five or six months Wa Lone had landed his first job in journalism on the weekly People’s Age in Yangon, where his editor was Pe Myint – now Myanmar’s Minister of Information.</p> <p>In 2014, he joined the English-language daily, Myanmar Times, covering the historic 2015 general election that swept Nobel peace prize laureate Aung San Suu Kyi to power. The paper’s former editor, Thomas Kean, says he felt he had to hire him when they met because he clearly cared deeply about journalism and was also thoughtful and articulate.</p> <p>As well as providing a platform for him to excel as a journalist, the two years he spent at the Myanmar Times was a significant period in Wa Lone’s personal life – it was there that he met his wife Pan Ei Mon who works in the paper’s sales department. The couple married in April last year.</p> <p>Despite the long hours chasing stories and studying, Wa Lone has still found time to write a children’s book, The Gardener, a story in Burmese and English with an environmental message that draws on his own rural roots.</p> <p>He co-founded The Third Story Project, a charitable foundation that produces and distributes stories that aim to promote tolerance between Myanmar’s different ethnic groups, and is involved in projects working with orphans.</p> <p>Many of his weekends off have been spent visiting poor rural villages — much like the one where he grew up.</p> <p>Wa Lone joined Reuters in July 2016 and quickly made his mark with in-depth stories on sensitive subjects including land grabs by the powerful military and the murder of prominent politician Ko Ni, as well as uncovering evidence of killings by soldiers in the northeast.</p> <p>His reporting on the crisis that erupted in northwestern Rakhine state in October 2016 won him a joint honourable mention from the Society of Publishers in Asia in its annual awards.</p> <h3>Kyaw Soe Ook</h3> <p>Family and friends of Kyaw Soe Oo say he has always had a love of writing, and composed poetry before becoming a journalist.</p> <p>Min Min, the founder of the Root Investigative Agency, where Kyaw Soe Oo worked after starting his reporting career with the online Rakhine Development News, described the 27-year-old as “a joyful person” who had many friends.</p> <p>An ethnic Rakhine Buddhist, Kyaw Soe Oe grew up in the state capital Sittwe, and was one of five siblings.</p> <p>For Reuters, Kyaw Soe Oo worked on an investigative story about Myanmar’s plan to harvest the crops of Rohingya farmers who fled to Bangladesh, and reported on how some Buddhists were enforcing local-level segregation in central Rakhine.</p> <p>In many ways, Wa Lone and Kyaw Soe Oo symbolises their country’s emergence after decades of isolation – both from modest, provincial backgrounds, they worked hard to pursue careers that would have been impossible in the junta era into which they were born.</p> 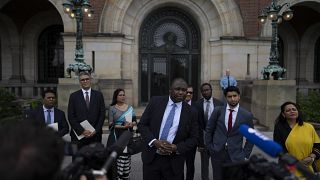