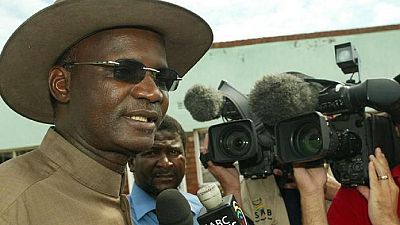 Exiled former minister for higher education in Zimbabwe, Professor Jonathan Moyo has spoken to the media for the first time since fleeing the country.

The once powerful politician, who is now a harsh critic of the Mnangagwa led government, spoke to the BBC and narrated the manner in which he fled Zimbabwe in addition to fielding questions on
the Mugabe regime and plans of going back home.

Moyo was one of the prominent members of the so-called G40 Zanu PF faction which viciously opposed ex-vice president Emmerson Mnangagwa from succeeding the nearly 94-year-old Mugabe.

I left Zimbabwe with the help of people who to me are angels because they saved lives. I escaped the net of the military people to be where I am legally

The G40 enjoyed the support of Grace Mugabe who was thought to be keen on taking over from Robert Mugabe.

Moyo told the BBC that ‘it is not illegal to support Grace Mugabe’.

“First of all, it is not corrupt to support any particular politician to become any office holder whether its vice president, president. It can’t be a crime in a constitutional democracy,” he said.

He went ahead to condemn the military takeover that ousted Robert Mugabe and ushered in the country’s current president, Mnangagwa deputised by former army chief Constantino Chiwenga.

“They have come into power via the bullet not the ballot,” Moyo charged, adding that Zimbabweans “cannot be expected to embrace the most feared individuals”.

Calling the takeover ‘unconstitutional’, Moyo went ahead to describe the manner in which he fled the country, which accorded to him was because of a ‘death warrant’ issued by the military.

What would you do if you & your family survived a 2am-15 minute ZDF attack on your house with 7 children one of them 12 years old, by 25 SAS snippers with semi automatic weapons; randomly firing tracer bullets & stun grenades? Is this the New Justice? New Dawn? New Era? New Zim? pic.twitter.com/vr6EWzByFq

“I left Zimbabwe with the help of people who to me are angels because they saved lives,” Moyo said. “I escaped the net of the military people to be where I am legally.”

It’s unclear where Moyo is at the moment. The BBC interview was done via a television link from an undisclosed location.

Since his resignation Moyo and his close allies have escaped into exile, claiming to have escaped assassination attempts by the military. A Malawi publication this week claimed that he was in that country.

Meanwhile, former ministers and other ex-Zanu PF officials linked to Grace Mugabe and the G40 faction who are still in the country have faced arrests on corruption charges.