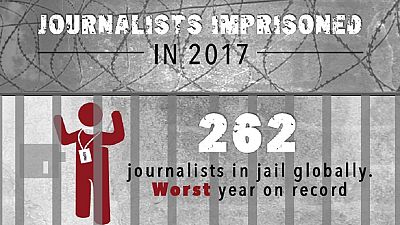 Egypt has 20 journalists in jail as of December 2017 according to a Committee for the Protection of Journalists (CPJ). Even though that is five less than in 2016, the north African country is said to have more journalists behind bars than any other African country.

The CPJ in its report added that of the 20, a dozen had not been convicted or sentenced for any crime. The commonest type of charge was flouting of anti-state laws.

“The prolonged imprisonment of Egyptian journalists comes as President Abdel Fattah el-Sisi battles deadly extremism and high unemployment in the country, and as Cairo and Washington cooperate closely on security.

“Soon after el-Sisi met Trump at the White House in April, his government passed a draconian anti-terrorism law that furthered its crackdown on the press by, among other things, enabling authorities to put journalists acquitted of terrorism-related charges on a terror watch list that restricts their financial and other rights, according to news reports,” CPJ said in a statement.

The specifically mentioned the case of photographer Mahmoud Abou Zeid, known as Shawkan. He was arrested whiles covering anti-government protests and remains in jail for over four years. Some of the charges he is facing along with 738 others are possessing weapons and attempted murder.

At the global level, the number of journalists imprisoned in the line of duty, hit a record high for the second year in a row. CPJ said figures from its annual prison census found 262 journalists remain behind bars.

An increase of three from the 2016 figure of 259. Egypt on the global ladder came in third behind Turkey and China in that order.

The worst three jailers are responsible for jailing 134—or 51 percent—of the total. CPJ has been conducting an annual survey of journalists in jail since the early 1990s. The Turkish figure is linked to a failed coup in 2016.

African countries dominated the first entrants unto the list. Appearing on the census for the first time in at least 12 months are Algeria, Democratic Republic of the Congo, Republic of Congo, Somalia, Uganda, Morocco, Niger, Equatorial Guinea. Others were Cambodia, Ecuador, Guatemala, Iraq, Pakistan and Ukraine.