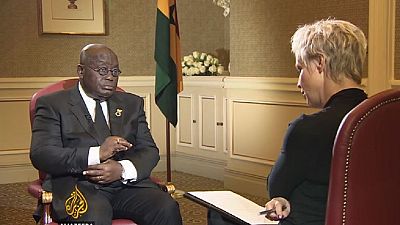 Ghana’s president Nana Addo Dankwa Akufo- Addo has said the issue of same-sex relationships was not on the agenda of the West African country. He, however, believes that its snowball effect will soon reach Africa.

Akufo-Addo was speaking in an interview with Gulf news channel, Al Jazeera, during which he addressed a series of national, continental and global issues.

Asked why homosexuality remained a criminal offence in Ghana, the president said, “I dont believe that in Ghana so far a sufficiently strong coalition has emerged which is having that impact of public opinion that will say, change it; let’s then have a new paradigm in Ghana.”

At the moment, I don't feel and I don't see that in Ghana there is that strong current of opinion that is saying that this is something that we need even deal with. It is not so far a matter which is on the agenda.

“At the moment, I don’t feel and I don’t see that in Ghana there is that strong current of opinion that is saying that this is something that we need even deal with. It is not so far a matter which is on the agenda.”

‘‘It is becoming a human right in some countries. The right to do homosexuality. The right for a human being to sleep with an animal. We are tired of some of these things and we must be frank about it. I think all these matters need to be seriously interrogated …,” he said in July this year.

Ghanaians like most Africans are known to be stiffly opposed to same-sex relationships which are considered to be against socio – cultural, communal and religious teachings. Most people who try coming out have been heavily slammed for engaging in acts seen as ungodly.