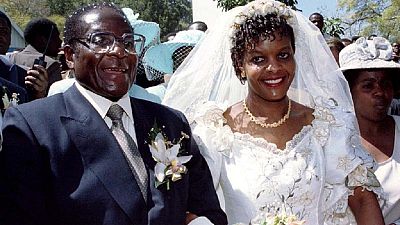 <p>The spectacular rise and fall of Zimbabwe’s uncompromising First Lady, Grace Mugabe, had an unusual beginning: an office affair.</p> <p>It was the early 1990s when President Robert Mugabe’s eye fell upon one of his shy young typists.</p> <p>She would become his wife, a ferociously ambitious politician and, more than two decades later, a contributor to the downfall of her 93-year-old husband.</p> <p>President Mugabe is trying to cling to power after the military took over this week in response to his purge of vice president Emmerson Mnangagwa, 75, a liberation war fighter and Grace’s sworn enemy.</p> <p>Mnangagwa’s aides even accused her of trying to poison him with ice cream from her dairy farm this year. She denies this.</p> <p>Grace, now 52 and under house arrest in Harare, had been calling for Mnangagwa’s removal for weeks as the two fought an increasingly bitter winner-takes-all contest to succeed the man who has led Zimbabwe since independence from Britain in 1980.</p> <p>It wasn’t the first time Grace had wielded influence over her husband. When it appeared former vice president Joice Majuru was in line to succeed Mugabe in 2014, he fired her following public rallies at which Grace derided Majuru.</p> <p>This time she appears to have gone too far.</p> <p>The purge of Mnangagwa and many of his comrades irked the military, who had no intention of allowing Grace and her youthful Generation 40 (G40) faction of the ruling <span class="caps">ZANU</span>-PF to take over the political reins.</p> <p>Deeply unpopular among much of the Zimbabwean public due to her alleged corruption and volatile temper, Grace does not have the liberation credentials the military believe are required to be a Zimbabwean ruler.</p> <p>The lavish lifestyle that earned her the nickname “Gucci Grace” and the political ambition that almost propelled her to the presidency were not evident when she met her future husband.</p> <p>“He just started talking to me, asking me about my life,” she told a South African journalist in 2013. “I didn’t know it was leading somewhere. I was quite a shy person, very shy.”</p> <p>At the time, they were both married. President Mugabe’s wife, Sally, was desperately ill and died in 1992. Grace and Robert were married in 1996 and have three children.</p> <p>“DIS-GRACE”</p> <p>At first Grace stayed out of politics and was better known for her spending habits, including buying mansions in South Africa, rare diamond jewellery, and Rolls-Royce limousines for her playboy sons.</p> <p>Then there are the repeated allegations of violence.</p> <p>In Singapore in 2009, photographer Richard Jones says Grace flew into a rage when he tried to take her picture. She ordered her bodyguards to hold his arms back while she punched him repeatedly in the face. Grace denies the assault.</p> <p>In August this year, Grace was accused of beating a young South African model who was partying with her sons.</p> <p>According to Gabriella Engels, Grace burst into a hotel room where she was talking with friends and whipped her with an electric cable as bodyguards looked on.</p> <p>Grace says she acted in self-defence after Engels tried to stab her with a knife.</p> <p>The reports of lavish spending and explosive temper earned her the title “Dis-Grace” back home in Zimbabwe, where an economic crisis had left most of the 16 million population mired in poverty and unemployment.</p> <p>Zimbabweans also question Grace’s credentials. Eyebrows were raised in 2014 when she gained a PhD in three months. Her thesis, on the changing role of the family, has never been published.</p> <p>This hasn’t stopped her trying to reach the political summit.</p> <p>When Majuru was removed, Grace became head of the <span class="caps">ZANU</span>-PF Women’s League, giving her a seat at the party’s top table.</p> <p>She used her political platform to take on Mnangagwa and his allies and made a push to succeed her frail husband.</p> <p>“They say I want to be president. Why not? Am I not a Zimbabwean?” Grace said at a recent rally. </p> <p><strong><em><span class="caps">REUTERS</span></em></strong></p>