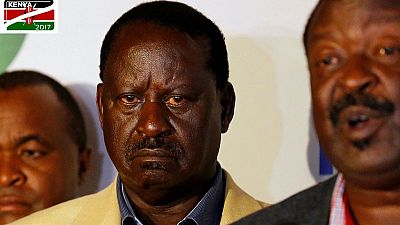 Opposition National Super Alliance (NASA) candidate Raila Odinga says he will not sign the Form 24A that will render his candidacy officially withdrawn from the October 26 election re-run.

He made the statement during an interview with local media Citizen TV on Friday in London where he delivered a lecture at the Chatham House on Kenya’s election and the rule of law.

Odinga maintained that he will not participate in the repeat elections as contained in the letter of withdrawal he and his running mate Kalonzo Musyoka wrote to the Independent Electoral and Boundaries Commission (IEBC).

The IEBC acknowledged the receipt of the letter on Wednesday but demanded a filled statutory form (Form 24A) in accordance with the electoral law to officially withdraw.

Odinga’s withdrawal is in protest against the electoral reform bill passed by parliament on Wednesday and signed by the president on Friday stipulating among others that if a candidate withdraws from a repeat presidential election, the other one would automatically win.

The amendment also limits the ability of the Supreme Court to overturn election results and scraps the minimum requirement to be an electoral commission chairman. It also allows other commissioners to announce the results in the absence of the chairman.

The amendment sparked weekly protests by NASA supporters who are also calling for a reform at the electoral commission including the sack of CEO Ezra Chiloba and other commissioners for allegedly rigging the August 8 elections in favour of the ruling Jubilee party.

A court ruled on Wednesday that all the candidates in the August 8 elections should be included in the re-run after Thirdway Alliance Party candidate Ekuru Aukot filed a case.

The Independent Electoral and Boundaries Commission (IEBC) announced later that all the candidates will be included except Cyrus Jirongo who was recently declared bankrupt by a court.