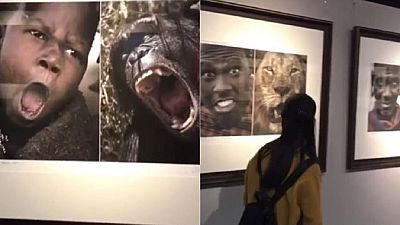 A Chinese museum has touched the nerves of Africans online after a video was posted online showing a seemingly racist exhibition where Africans were displayed alongside wild animals.

The video, originally uploaded on Instagram by a Nigerian Edward E. Duke, showed Chinese art lovers admiring the exhibits at the Hubei Provincial Museum in Wuhan ahead of the national Golden Week holiday.

The exhibits include a photograph of a roaring lion next to an African man with the same expression; a pensive monkey next to another man; elephants and giraffes next to African children among others.

The original video which was deleted after it was posted by one of the supposed visitors to the museum had the caption: “首都博物馆 the capital museum in Wuhan, China put pictures of a particular race next to wild animals why? Are they the only race to have impoverished looking.”