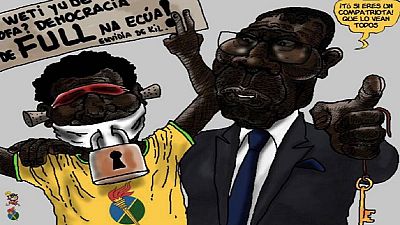 An Equatorial Guinean activist and political cartoonist has been detained since Saturday night without charge in Malabo over his work that features the president and government officials.

The rights body fears the cartoonist may be charged with criminal defamation for his work that criticizes the president and government officials.

Family members were allowed to see him on Monday and Tuesday at the Office Against Terrorism and Dangerous Activities in the Central Police Station where he has been detained and interrogated for the over 72-hour limit required by the law.

“Ebalé has lived outside of Equatorial Guinea for several years and had returned to the country to renew his passport. He has not been taken before a judge, which Equatoguinean law requires within 24 hours,” Human Rights Watch said on Tuesday.