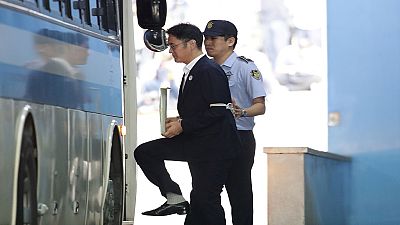 The Seoul Central District Court sentenced heir-apparent of the Samsung conglomerate Lee Jae-yong to five-year imprisonment for crimes including bribery on the afternoon of Friday.

Lee, vice chairman of Samsung Electronics and de facto head of the conglomerate, was charged with a string of crimes namely bribery, corruption, hiding assets overseas, concealing criminal proceeds and giving false testimony. He is regarded as a key person in a scandal of insider trading leading to the impeachment of South Korea’s former president Park Geun-hye.

Four other executives of Samsung were also charged along with Lee.

Large numbers of opponents and supporters of Lee rallied in front of the court in the morning before the verdict with banners reading “Punish him!” and “Release Vice-chairman Lee Jae-yong soon!”

“I think all 17 million Koreans who participated in the candlelight vigil for the arrest of Lee Jae-yong are convinced (that he was guilty). I hope Samsung can take the opportunity to run the company in a more apparent and open way,” said a local resident.

It is said the verdict opened 30 audits to public; however, up to 454 applications had been submitted, making a record application rate of 15 to 1.

Before the announcement of the verdict, the defendants had submitted their appeal for prohibiting taking photos and live broadcasting during the verdict to the court and the court agreed the verdict not be broadcast live.

The prosecutors said Lee gave or pledged to give donations worth of 43.3 billion won (38.4 million U.S. dollars) to a non-profit foundations operated by Choi Soon-sil, Park’s confidante, to win the government’s support for a merger case of Samsung that would empower Lee to gain de facto control over the conglomerate.

Lee denied all charges and said he did not seek the government’s support in his own favor during his meetings with the former president. His lawyer said Lee was not involved in and informed about the donations Samsung provided to Choi. He suspected the prosecutors’ conclusions were influenced by the public’s emotion.

Park and her confidante Choi were accused of colluding to coerce tens of millions of U.S. dollars out of three big conglomerates, including Lotte and Samsung, in return for political favors. The former president was also accused of allowing Choi the access to state secrets and giving her partial control of the government.