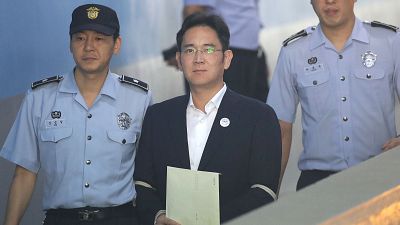 The billionaire’s lawyer has already said that he will be appealing the sentence, passed on charges of bribery, embezzlement and the concealment of assets, amongst other things.

Many believe that his conviction will mean a guilty verdict for Park, too.

Protesters gathered outside the court in support of Lee and their former president.

They claim prosecutors built their case on circumstantial evidence and unsubstantiated media claims.

On the other side of the road, however, anti-corruption demonstrators staged a rival protest. They see the trials as a chance to address the cosy relations between South Korea’s politicians and its business leaders.

The third generation head of the Samsung dynasty, 49-year old lee Lee has been at the helm of the company since his father’s 2014 heart attack.

Investors worry that his conviction could leave a leadership vacuum.

At least Lee Jae-yong wan’t sharing classified information with a shaman or rigging elections. South Korea is such a corrupt country.