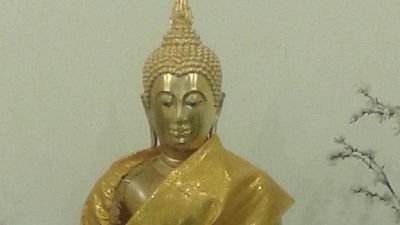 A 5 feet bronze Buddha statue has been stolen from a temple in Botswana’s capital Gaborone ahead of the controversial visit of Tibetan spiritual leader Dalai Lama.

The police said in a statement that the statue was stolen during a break-in on July 3 at the temple and so far, no arrest has been made.

However, the Botswana Buddhist Association President Darhsini De Silva told the BBC that the statue was stolen on July 9.

The theft comes weeks ahead of the first visit of the Dalai Lama to the country and Africa to address a human rights conference in the capital on August. 17-19.

China has strong ties with Botswana, and the visit of the Dalai Lama has been touted as one that could strain the relationship.