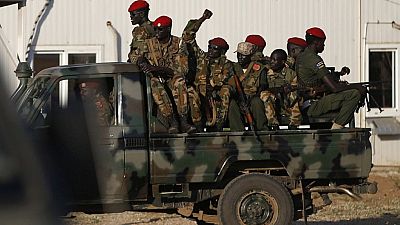 South Sudan’s government said on Friday it had taken the last town before the main rebel base of Pagak, where thousands of civilians have fled to escape fighting near the border with Ethiopia.

Mai-wut had been under rebel control since the beginning of the war in late 2013 and is a gateway to the main rebel stronghold of Pagak, which if taken by the government would weaken the rebellion led by former vice president Riek Machar.

Mai-wut sits along a supply route from Ethiopia to another town, Mathiang, which is adjacent to the Paloch oilfields, the main source of government revenue.

Dickson Gatluak Jock, a spokesman for the forces of South Sudan’s First Vice President Taban Deng Gai, who were involved in the fighting, said three government soldiers were killed and five others wounded.

Jock said they entered Mai-wut on Thursday morning after clashing with rebel forces.

“It is under our control. Our forces managed to reach the town around 10 a.m.,” he said.

Up to 7000 families have fled to Pagak to escape the fighting since the government launched its offensive earlier this month, said Sarah Nyanath, head of GESSO, a local aid group in the town.

Jock said on Friday that Deng Gai’s forces at Mai-wut were backed by army troops from Paloch.

He said they were forced to attack the rebels after they hit government positions near Mai-wut.

A spokesman for the SPLM-IO rebels confirmed the town was no longer under their control.

“Yesterday at around 7 a.m., the government forces entered Mai-wut County. They managed to dislodge us and they captured Mai-wut,” said Lam Paul Gabriel.

The government say their main aim is to take control of areas under Machar including Pagak and put an end to his movement. This would favour Deng Gai and his group within the government.

The fighting in South Sudan has forced millions to flee their homes, split much of the population along ethnic lines, paralysed agriculture and cut oil production.