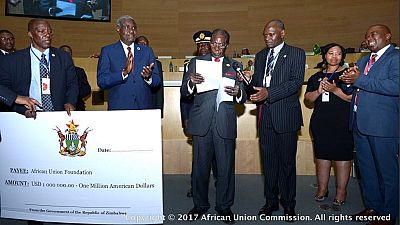 Zimbabwean president, Robert Mugabe, on Monday handed a cheque of $1 million to the African Union (A.U.) Foundation as part of efforts aimed at lessening the body’s dependence on foreign aid.

The 93-year-old formally handed over the cheque to the A.U. Commission (AUC) chairperson, Moussa Faki Mahamat, on the floor of the AU headquarters during the 29th Heads of State summit in the Ethiopian capital, Addis Ababa.

The state-owned Herald newspaper reported that the amount had been raised from the sale of cattle donated by Zimbabwean farmers following an appeal by Mugabe to help the A.U. self fund its operations.

As a farmer and an African, donating cattle which is a sign of wealth, comes naturally.

‘‘As a farmer and an African, donating cattle which is a sign of wealth, comes naturally,’‘ Mugabe said during the donation.

Zimbabwe President Robert Mugabe hands over a donation of Cheque to African Union (AU) Foundation from sale of his cattle #29thAUSummit pic.twitter.com/OcqfiyE4SQ

The issue of financing its own activities has been prominent in the A.U’s recent agenda. It came up strongly a year ago during the 27th Assembly of Heads of State and Government in Rwanda.

Even though the Kigali summit was under the theme: “2016: Year of Human Rights with a particular focus on the Rights of Women,” it’s main highlight was the launch of the African passport and the continent’s resolve to fund its own activities in the immediate short term.

Zimbabwe has its own share of economic issues stemming from sanctions by western governments – which Harare continually accuses of strangling the southern African country economically.

An acute shortage of cash has not helped matters as the central bank moved to introduce bond notes to cure the shortage. A biting drought left hundreds without food leading the government in March 2017 to appeal for $100 million in aid.

“Government stopped issuing Grain Import permits about four months ago and no maize imports are allowed at our borders,” Deputy Agriculture Minister Davis Marapira was quoted as saying. 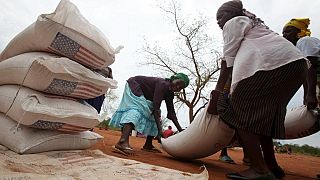 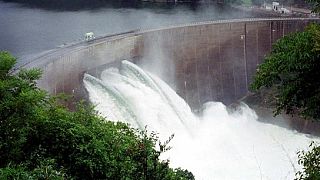 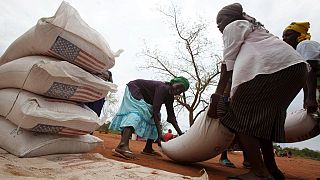