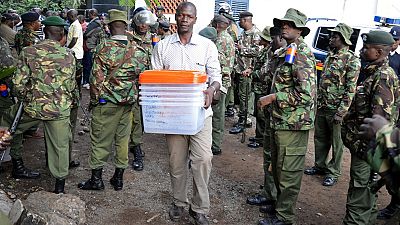 Kenyan police fired teargas on Tuesday to disperse hundreds of people who took to the streets to protest the outcome of a regional party primary in the west of the country.

This month’s primaries, where voters choose party candidates, have been a chaotic affair, marked by violent clashes, cancellation of results and claims of rigging.

The problems have raised fears over the planning for a national vote on Aug. 8 and whether there may be further violence in Kenya, a key Western ally in a volatile region and East Africa’s largest economy.

Voters will pick a president, parliament and local authorities, a decade after 1,200 people were killed in ethnic violence following a disputed presidential election.

The Independent Electoral and Boundaries Commission (IEBC), which will conduct the election, said it would punish those behind cases of violence in the primaries.

Tuesday’s protesters were angered by the results of a primary that re-elected the incumbent governor of the Homa Bay county, Cyprian Awiti, to run for the opposition Orange Democratic Movement (ODM) in August.

At least one person was injured in the fracas, said Willy Lugusa, the police commander for the region, adding police dispersed the protesters to prevent damage to private property.

“We are not using live bullets, we are only using teargas when people are demonstrating in a manner that is likely to cause the breach of the peace,” he told Reuters.

ODM, which is led by the main opposition leader Raila Odinga, said it had suspended the results of the Homa Bay poll for governor, and those of the neighbouring Migori county, and had formed a team of three people to investigate both polls.