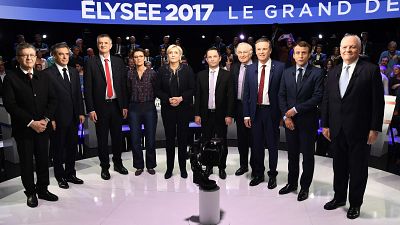 <p>For the first time 11 candidates in the French presidential election have gone head-to head in a televised debate.</p> <p>The three-hour marathon was sometimes feisty, often heated, as all tried to win over some of the two-thirds of voters who say they remain <a href="https://www.theguardian.com/world/live/2017/apr/04/french-election-2017-france-all-presidential-candidates-take-part-in-live-tv-debate">undecided</a> just three weeks before the election.</p> <p>On the night far right leader Marine Le Pen came in for few stinging attacks:</p> <p>Left-winger Philippe Poutou: </p> <p>“The worst thing about the National Front is that it says it is anti-system, but its not so fed up with it that it won’t use it when summoned by the police. We workers, we have to go when called, we do not have worker immunity, sorry. You are lucky, the system protects you.”</p> <p>Poutou was refering to Le Pen who in February used her immunity as EU lawmaker to refuse to go to a police summons over allegations she had made illegal EU payments to her staff.</p> <p>Europe, immigration, the economy all came up, but it was often the personal remarks which hit home.</p> <p>“Mr Macron you shouldn’t pretend to be something new when you are speaking like fossils that are at least 50 years old, “ said Le Pen.</p> <p>Centrist candidate and current front runner Emmanuel Macron was having none of it:</p> <p>“But Mme Le Pen,Sorry to tell you this but you are saying the same lies that we have heard from your father for 40 years.”</p> <p>“The French,” said Le Pen “are obviously very attached to their traditions, they want to preserve them.”</p> <p>A snap poll after the debate had the firebrand leftist Jean Luc Melenchon taking first place as the most convincing performer after also putting Le Pen in his sights and on one occasion accusing her of trying to impose her views on the people of France.</p> <p>But the race for the Elysee remains one of the most unpredictable in memory with twists and surprises in which some big players have been marginalised and <a href="http://www.euronews.com/2017/03/30/fillon-adviser-says-scandal-harms-campaign-but-its-not-over">scandal has tainted others</a>. </p> <blockquote class="twitter-tweet" data-lang="en"><p lang="en" dir="ltr"><span class="caps">FRENCH</span> <span class="caps">ELECTION</span> <span class="caps">DEBATE</span>: Le Pen says ‘companies hiring foreigners should be taxed’ <a href="https://t.co/8shMEBjX8D">https://t.co/8shMEBjX8D</a></p>— Voice of Europe (@V_of_Europe) <a href="https://twitter.com/V_of_Europe/status/849372955582894082">April 4, 2017</a></blockquote> <script async src="//platform.twitter.com/widgets.js" charset="utf-8"></script>