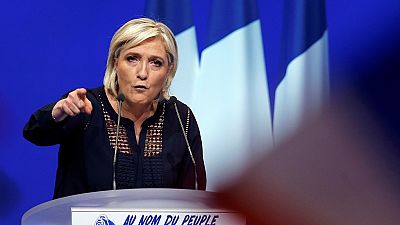 <p>French far-right leader Marine Le Pen met Chad’s President Idriss Deby on Tuesday to discuss the two allies’ cooperation in the fight against Islamist militants in Africa.</p> <p>Le Pen, among the frontrunners in the French presidential election, arrived in Chad on Tuesday and is using the two-day visit to meet French troops stationed in Chad and to outline her policies for the continent.</p> <p>“We have of course discussed the cooperation between France and Chad in the fight against terrorism,” the National Front party candidate said after the meeting with Deby in Am-Djarass, near the borders with Libya and Sudan.</p> <p>She said they had also discussed Libya, and she again condemned France’s role in helping to oust its longtime leader Muammar Gaddafi, which she called “a serious mistake … with serious consequences.”</p> <p>Chad has one of the region’s most capable militaries and hosts the headquarters of France’s 4,000-strong West African anti-militant operation, known as Barkhane.</p> <p>Le Pen also traveled to Lebanon in February to get a sense of the Syrian crisis. Among her foreign policy objectives Le Pen has called for closer cooperation in Syria with President Bashar al-Assad and a rapprochement with Russian leader Vladimir Putin.</p> <p>She also wants to increase the defense budget to 2 percent of gross domestic product by 2018, up from about 1.78 percent now, and 3 percent by 2022.</p>