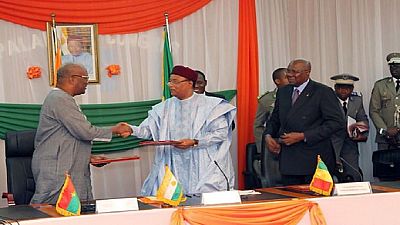 Niger, Burkina Faso and Mali decided on Tuesday to set up an anti-terrorism force to fight against insecurity in the Liptako-Gourma area that sits across their borders.

The area is believed to be a growing sanctuary for terrorists and the presidents of three states agreed in Niamey to create the Liptako-Gourma Multinational Security Force.

“We have decided to pool our intelligence resources, our (military) operational capacities to deal with the security situation in this area,” Niger’s Mahamadou Issoufou, Roch Marc Christian Kaboré of Burkina Faso and Modibo Keïta of Mali agreed in during a tripartite conference.

“The region of Liptako, once a haven of peace is fast becoming a sanctuary of terrorist groups and criminals of all kinds … Despite the efforts made by the member states, in relation to the international community, the security situation in the zone remains volatile and worrying,” said the communique from the conference.

The new force will be like the mixed multinational force created by Niger, Nigeria, Chad and Cameroon since 2015 to fight the Islamist group Boko Haram in the Lake Chad basin, President Issoufou explained.

The Liptako-Gourma zone is a vast 370,000 km2 area sitting across the three countries and home to 45% of the total population of the three states.