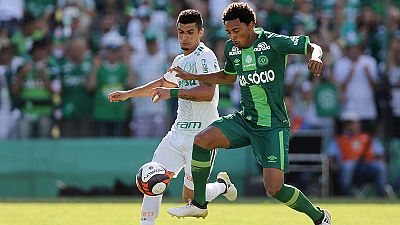 Emotions were raw as Chapecoense played their first match since most of their players died in a plane crash.

Before kick off survivors and their relatives took centre stage. The goalkeeper who had his leg amputated as a result of the crash, was presented with the Copa Sudamericana. The team had been travelling to the tournament’s final when the tragedy occurred.

Follman cried as he lifted the trophy.

The wives of the players killed in the crash received the medals their husband’s would have been awarded.

There was no minute of silence, instead the friendly against Palmeiras stopped at the 71st minute to allow fans to sing the now famous ‘Vamos Chape!’ chant in tribute to the players and staff.

In November, the team’s plane ran out of fuel, killing 71 people on board, many of them players, officials and reporters.