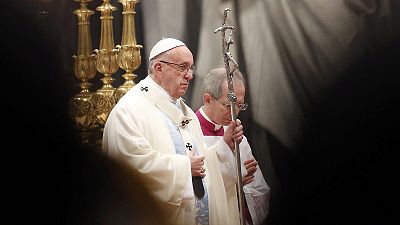 Pope Francis has condemned the deadly attack in Istanbul and offered prayers for the victims, their families and the entire Turkish people.

He urged support for people of good will who “courageously roll up their sleeves to face the plague of terrorism”.

His comments came during his New Year address to a crowd of tens of thousands of people in St Peter’s Square, in a departure from his prepared text.

Speaking on the day the Catholic Church marks its World Day of Peace, the Pope said peace was built by rejecting hate and violence, and saying “yes” to brotherhood and reconciliation.

Earlier the Pope led a New Year Mass at the Vatican, citing the Bible as he criticised a sense of isolation in today’s society.

“The loss of the ties that bind us, so typical of our fragmented and divided culture, increases this sense of orphanhood and, as a result, of great emptiness and loneliness. The lack of physical (and not virtual) contact is cauterizing our hearts and making us lose the capacity for tenderness and wonder, for pity and compassion,” Pope Francis said.

#PopeFrancis: Whether 2017 will be a good year or not depends on us. Choose to do good each day, say 'no' to hatred, 'yes' to reconciliation pic.twitter.com/dBTvqu44pN