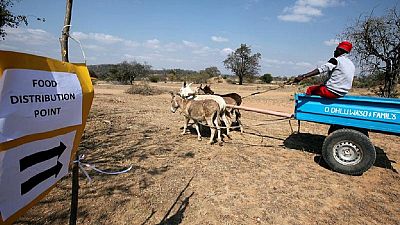 The Government of India this week gave a cheque of $10 million to Mozambique as part of efforts in helping the southern African country currently suffering from an acute drought.

According to India’s Ministry of External Affairs, ‘‘This grant-in-aid was provided in response to a request from the friendly country of Mozambique, which has faced two consecutive years of drought leading to severe difficulties for its people.’‘

India also announced that they will help the Mozambique authorities to urgently purchase wheat from the international market, and thus help ensure availability of food for vulnerable sections of the population.

This grant-in-aid was provided in response to a request from the friendly country of Mozambique, which has faced two consecutive years of drought leading to severe difficulties for its people.

The Indian High Commissioner in Maputo handed over the donation to the Mozambican Minister of Trade and Industry. Mozambique like other countries in the southern African region have been hit by a drought brought about by the El-Nino phenomenon.

India has been generous in cash and in kind to Mozambique’s regional neighbor Zimbabwe with a $1 million aid package in August this year. That gesture was followed by a donation of some 5,500 tonnes of rice in October.

India and Mozambique have long had warm and multi-faceted relations. India was among the first countries to open its embassy in Maputo, after Mozambique won its freedom in 1975. Mozambique is also home to nearly 20,000 persons of Indian origin, who provide a human link between the populations of both countries.

India said it saw Mozambique among its most important economic partners in Africa. The country accounted for almost 25% of India’s net Foreign Direct Investment (FDI) into Africa.

‘‘We see a closer economic partnership with Mozambique as a vital ingredient in addressing India’s future needs of energy and food security. Mozambique was the first country in mainland Africa that Prime Minister Shri Narendra Modi visited earlier this year.

‘‘The gift from India for purchase of wheat is a gesture of solidarity for a country which we see as one of our most important future partners,’‘ the statement concluded.

About the Southern Africa drought

The drought has hit much of the southern African region including the maize belt in South Africa, the continent’s most advanced economy and the top producer of the staple grain.

An estimated 31.6 million people across the region are struggling to feed themselves, the Red Cross has said.

The United Nations’ food agency FAO, said last month that it needed $730 million over the next 12 months for relief in seven southern African countries including Mozambique.

The arrival of La Nina, a weather pattern, expected later this year, which usually brings floods to southern Africa could worsen the situation, the U.N. has said.