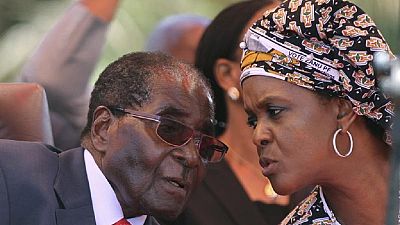 First Lady of Zimbabwe, Grace Mugabe, has reportedly told a powerful bloc in the ruling Zanu-PF party that she was already the president of the country because she ‘plans and does everything with President Robert Mugabe.’

The NewsDay portal quotes a leader of the Zanu-PF women’s league, Angeline Muchemeyi, as saying that Grace said she was not interested in the post of vice president as was earlier reported as plans continue as to who succeeds the 92-year-old Mugabe.

The First Lady said “I’m the wife of the president, I’m the president already … I plan and do everything with the president, what more do I want, for now the position of the women boss is enough,” Muchemeyi said.

The subject of who takes over from Mugabe has come up time and again. Grace Mugabe who currently leads the women’s league of the party is seen as a strong contender. She has held the post since 2014.

Zimbabwe’s two vice presidents, Phelekezela Mphoko and Emmerson Mnangagwa, have been named as other possible successors. Mugabe has repeatedly criticized intra-party jostling to take over his job.

Speaking to a group of war veterans at the weekend, Mugabe announced a time line for his resignation whiles admitting that the country’s economy was crumbling. The southern African country’s currency is in poor shape and banks running out of cash, the country is also feeling the pinch of a crippling drought.

However, the ruling party confirmed that Mugabe will be contesting the country’s next election in 2018 and if he is re-elected, he will only retire in 2023, when he turns 99.

Mugabe is the only President Zimbabwe has had since independence 36 years ago, addressing thousands of supporters, a few days after a section of war veterans called him a corrupt dictator,