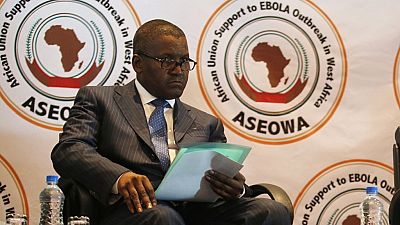 Africa’s richest man, Alhaji Aliko Dangote, has stated that Nigeria should be serious about diversifying the economy. According to him persons who were still hoping for a rebound of oil to improve the economy should forget it.

“We need to be very serious. People who are hoping that crude oil is going to go back up to around $70 and $80 per barrel, it is not just going to happen. There is so much oil everywhere and I think, at $53 per barrel, it is a temporary measure.

“If crude oil gets to $90 per barrel, none of us would talk about recession again; we would go back to our normal ways. For us to go through this long haul of low oil price would help push us into the real sector which is agriculture, construction and all others,” Dangote said.

We need to be very serious. People who are hoping that crude oil is going to go back up to around $70 and $80 per barrel, it is not just going to happen. There is so much oil everywhere and I think, at $53 per barrel, it is a temporary measure.

He was speaking at a forum in the administrative capital, Abuja. The business mogul also disclosed measures by his outfit to help reduce the price of fertilizers in the country. He promised to substantially force down the price of the product by close of 2017.

Dangote revealed that the country’s fertilizer production was set to hit 3 million tonnes and that was going to beat down prizes. He commended the federal government policies as key to the availability of fertilizers to farmers.

He said, “Government has actually done quite a lot, and I think by the end of next year or so, you will buy fertilizer even cheaper than what you are buying today. Secondly, we will be begging you to buy. There won’t be scarcity of fertilizer anymore.

‘‘We have three million tonnes of capacity coming into the market by the end of next year and this is also thanks to the policies of the Federal Government.

Dangote is on record to have said that Nigeria entered recession because ‘‘… 90% of the government’s foreign exchange earning is from oil, the only way for us to get out of this recession is for us to try and make sure that we move quickly into action. Action by saying that we diversify the economy quickly,’‘ he said.

Nigeria, Africa’s second largest economy, officially entered a state of economic recession for the first time in over 20 years. This came after figures revealed that the economy contracted for a second consecutive quarter.