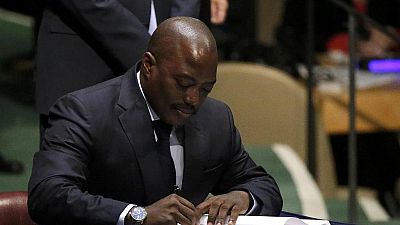 The Constitutional Court in the Democratic Republic of Congo (DRC) has ruled that the electoral commission can delay presidential elections set for November this year.

The Independent National Electoral Commission (CENI) petitioned the court for an extension of polls till 2018. The ruling means that incumbent Joseph Kabila can stay in power till when the next elections are held.

The five judges who sat on the case subsequently ordered the electoral body to immediately develop a new calendar for the next elections. The last calender they presented indicated that a credible voters register will be ready in July 2017 after which they need over 500 days to organize polls in July 2018.

The CENI had cited lack of funding and delays in voter registration as the major factors behind the postponement. But opposition parties rejected the explanations hence the decision to petition the courts to legalize the postponement.

A court had earlier this year, ruled that if the country fails to organize elections later this year, Kabila could stay on as president. A series of deadly opposition protests in September forced the government to enter a deal with some opposition parties over the weekend.

The agreement provides for the management of post-December 19, the date of the end of the second and final term of Joseph Kabila, and the organization of elections in April 2018.

According to the draft, President Kabila will remain in office until the installation of a newly elected President. He will manage the country with a prime minister from the opposition.

Even though he has yet to make known any ambitions to run for an ‘unconstitutional’ third term, there has been pressure from home and abroad calling on him to step down at the end of his tenure.

Kabila has ruled the country for the past 15 years following the assassination of his father Laurent Kabila. He is not eligible to stand for another term after December. Whenever elections are held it would be the first democratic transition in the war torn country.

Dutch firm, Gemalto was contracted to help the DRC government to compile a new voters register, months later, the electoral body announced that elections were not feasible this year as planned by was possible by July next year.