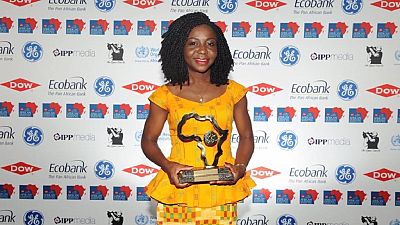 Her award is in recognition of a 2015 story she produced on the aftermath of the Ebola epidemic in Sierra Leone and Liberia titled Freetown Ebola Orphans.

Narkwor’s story, which she produced for her former employers TV3 Network Limited in Ghana, focused on ostracised children of Ebola victims who are rejected by relatives due to the perception that they are contagious.

She examined how Liberia and Sierra Leone will recover from the crisis that crippled health care systems, families and businesses.

Out of the 17 winners on the night, Narkwor was the only Ghanaian shortlisted.

Narkwor Kwabla’s hardwork and commitment as a journalist resulted in her ascent to the deputy editor-in-chief position since she joined Africanews in October 2015 as a journalist.

She was previously a news anchor, reporter and producer at Tv3 Network Limited which is one of Ghana’s leading television news channels.

Narkwor, who is an alumna from the University of Ghana, won the Best TV Feature Story Award from the Ghana Journalists Association Awards in 2014.

Over 1,600 entries from 38 countries across the African continent were submitted to this year’s edition of the Award in English, French and Portuguese.

The award was established in 1995 and has since grown to include 14 categories with the objective of “reinforcing the importance of the role of journalists in Africa’s development and to reward, recognise and encourage journalistic talent across all media disciplines.”

Congratulations to you all. Thank you to each of you for telling the stories of Africa and its people to the world. #AfricanJournoAwards pic.twitter.com/hjEGD8eL9T