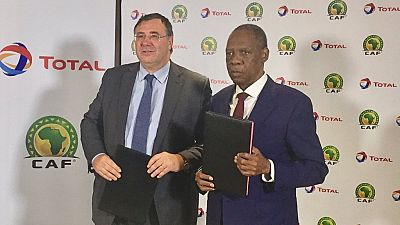 The Confederation of African Football (CAF) and French oil giants, Total, have officially signed the eight-year sponsorship deal that was announced in July this year.

Patrick Pouyanne, Chairman and CEO of Total and CAF president Issa Hayatou signed for the respective parties at a ceremony on Monday.

The Total boss reiterated the importance of the company to be associated with football on the continent. “Becoming the official sponsor of CAF gives us the immense honor of associating Total with its 10 main competitions,” he said.

“Football plays a key role in Africa, and Africa is an integral part of our DNA and of our ‘One Total’ company ambition,” Pouyanne added.

“This partnership is a major milestone in our ongoing search for additional resources to accelerate African football’s development,” the President of the Confederation of African Football, Issa Hayatou said in July.

As the title sponsor of 10 CAF competitions, Total will be seen at more than 1,500 matches during: