DRC: Katumbi hints of support for opposition chief Tshisekedi if ... 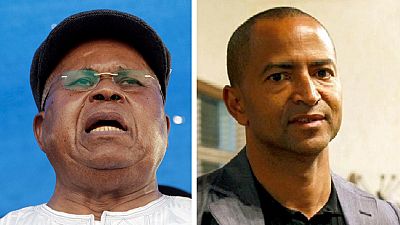 <p>Moise Katumbi, a leading opposition figure in the Democratic Republic of Congo (<span class="caps">DRC</span>) has reiterated that he will return to the country to partake in the political process despite the political witch hunt against him.</p> <p>In June this year, Katumbi was jailed 36 months in absentia and fined $6m in a property appropriation case. His lawyers claim the courts’ ruling is part of a political distraction meant to derail his ambitions. </p> <p>Katumbi was responding to questions fielded to him by the British broadcaster, <span class="caps">BBC</span>. ‘‘I am a Congolese citizen, I will go home and I am running for president. The charges of plotting against the government are a distraction,” he emphasized. </p> <blockquote class="twitter-tweet" data-lang="en"><p lang="en" dir="ltr">cctvnewsafrica: DR Congo opposition leader Moise Katumbi vows to return for presidential vote<br /> … <a href="https://t.co/HJhZNDEw3Z">pic.twitter.com/HJhZNDEw3Z</a></p>— #AfricaIsRising (@Africa_IsRising) <a href="https://twitter.com/Africa_IsRising/status/782991509700349953">October 3, 2016</a></blockquote> <script async src="//platform.twitter.com/widgets.js" charset="utf-8"></script> <p>Katumbi left the DRC to South Africa before being flown to Europe to seek medical treatment after he inhaled tear gas fumes fired by police when he appeared before a Lubumbashi prosecutor with his supporters to answer to charges of hiring mercenaries to overthrow the government.</p> <p>According to the <span class="caps">BBC</span> interview, Katumbi also stated that he was ready to support the candidature of serial presidential aspirant, Etienne Tshisekedi, ‘‘If the people say he’s the better candidate.’‘</p> <p>The TP Mazembe bankroller, a former ally of the incumbent Joseph Kabila and former governor of the Katanga province, now lives in Belgium. He has accused Kabila of driving the <span class="caps">DRC</span> towards ‘absolute dictatorship,’ after the government threw out a human rights investigator.</p> <p>Katumbi is part of the opposition bloc that has refused to partake in the African Union organized national dialogue led by Edem Kodjo. He has also called for Kabila to step down and for elections to be held.</p>