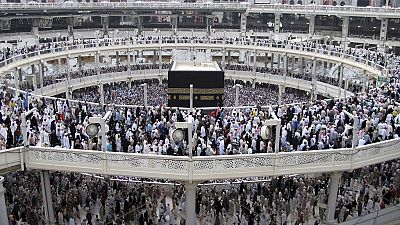 Muslim pilgrims are trooping to Saudi Arabia to be part of the largest gathering of people in the world to participate in the annual Hajj.

About two million people are expected in Mecca to observe the fifth pillar of Islam which is a mandatory religious duty for an adult Muslim who can afford it.

This year’s Hajj is expected to begin on Friday September 9 and end on September 14. Already, Saudi authorities estimate about one million people are in the country getting ready to embark on the ritual.

The city of Mecca has over 20,000 staff deployed to serve pilgrims while about 15,000 cleaners are positioned to clean the holy sites, the Saudi Arabian Ministry of Hajj and Umrah announced.

Tents have been erected alongside buses to accomodate and transport pilgrims from one point to the other during the rituals which have been heavily regulated this year to reduce congestion and avoid accidents. Eight hospitals and 128 health centers are also ready for service.

Over 30,000 restaurants and service shops have also been accredited to serve the millions who will be in the country.

Thousands of pilgrims from Ghana are already in the city of Jeddah in Saudi Arabia preparing to leave for Mecca.

For the first time, the Tamale Airport in northern Ghana transported pilgrims from the northern sector to Mecca to reduce congestion at the Kotoka International Airport in the capital Accra.

According to the chairman of the Pilgrims Affairs Office of Ghana, the only challenge faced this year was delay in issuance of Hajj visas for over 200 pilgrims. Also, 39 pilgrims were repatriated from Saudi for being minors and females less that 40 years without the required guardians.

Sierra Leonean Muslim pilgrims have also embarked on the journey to Mecca for the first time in two years since they were banned when the deadly Ebola epidemic ravaged the West African country.

After 2 years under quarantine, some Muslims in Sierra Leone will now be allowed to perform the hajj https://t.co/YYJQ4Dcc3h

800 pilgrim places were alloted to the country which the local Hajj organising committee expressed discontent.

About 20,000 Nigerian pilgrims are also in Mecca after they left Medina where they originally disembarked from their planes from the west African country.

On the third day of Hajj, Muslims around the world will celebrate the Eid al-Adha, the holy festival of sacrifice.