Presidents of Benin and Togo on official visits to Nigeria [Photos] 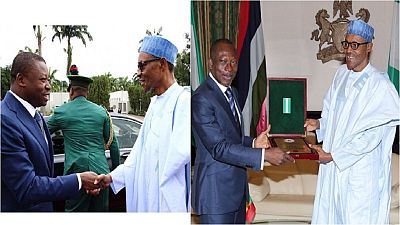 The presidents of neighbouring West African countries Benin and Togo have paid official visits to Nigeria on Tuesday.

President Faure Gnassingbe of Togo arrived earlier in Lagos, the economic capital of the most populous country, and was met by the Governor of Lagos State, Mr Akinwunmi Ambode, the Minister of Industry, Trade and Investment, Okechukwu Enalemah, President of Dangote Group, Aliko Dangote and some members of the business community.

President Faure Gnassingbe of Togo on tour of the Dangote Refinery & Petrochemical Plant, in Lagos pic.twitter.com/ngFiO8FYgh

He first toured the Dangote Refinery, Gas and Petrochemical Plant which is valued at an estimated $14 billion covering 2135 hectares of land. It is expected to refine 650,000 barrels of oil per day.

President Gnassingbe was later received by President Muhammadu Buhari in Abuja where they held diplomatic talks in the presence of other government officials from the two countries.

On the other hand, newly elected president of Benin, Patrice Talon paid his first official visit as president to the neighbouring nation on Tuesday afternoon and was received by President Muhammadu Buhari at the State House in Abuja.

The two spoke about strengthening ties in the security and energy sectors which is vital for the two neighbours. Also, President Buhari promised to restore their economic ties so as to eliminate illegal trade around their borders.

After his election in March, Patrice Talon was expected to embark on his first diplomatic visit to Nigeria, but he rather paid a courtesy call on his Ivorian counterpart in Abidjan.