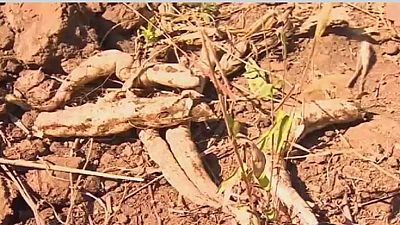 Close to four million Zimbabweans are malnourished as the country’s drought worsens.

The failure of rains during the second season has been catastrophic as Zimbabwe struggles to recover from a recession which led to hyperinflation and shortages.

Farmers say they have lost cattle and crops and fear that things might soon get out of hand.

“Three or four months to come, if nothing is taken as an assistance then surely it means people are going to die. You will hear the stories of dying here and there,” a Zimbabwean farmer, Mafios Ganyari told Reuters.

Finding clean water in rural areas has become an uphill task as water sources dry up with women and children bearing the cross.

According to the United Nations Development Programme, close to 5 million people will need aid by March.

Social workers have warned that it is a matter of life and death.