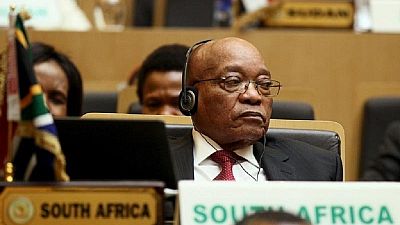 <p>A South Africa court has dismissed an appeal by president Zuma and the National Prosecuting Authority (<span class="caps">NPA</span>), with respect to a 2009 corruption probe into arms procurement when Zuma was vice president.</p> <p>Local media however report that the president and the <span class="caps">NPA</span> have in the wake of the ruling denied leave to appeal.Barring a petition to the Supreme Court of appeal, Zuma must face the 783 charges in respect of the case.</p> <p>The full bench of the High Court in Pretoria‚ refused Zuma and the NPA’s application for leave to appeal the judgment the court passed in April which set aside the decision taken by acting National Director of Public Prosecutions Mokotedi Mpshe in April 2009.</p> <p>Mpshe dropped the charges against Zuma citing manipulated evidence with respect to the timing of when to serve the indictment on Zuma. A case that had commonly been referred to as the Spy Tapes.</p> <blockquote class="twitter-tweet" data-lang="en"><p lang="en" dir="ltr">Court to decide on Zuma's appeal against 783 corruption charges <a href="https://t.co/y2ZGJ95qt1">https://t.co/y2ZGJ95qt1</a></p>— africanews (@africanews) <a href="https://twitter.com/africanews/status/746254700647944192">June 24, 2016</a></blockquote> <script async src="//platform.twitter.com/widgets.js" charset="utf-8"></script> <p>In dismissing the application Deputy Judge President Aubrey Ledwaba said the arguments raised by the <span class="caps">NPA</span> and Zuma were irrelevant and had no merit.</p> <p>The case was brought by the opposition Democratic Alliance, who insist that Zuma should have his day in court.</p> <p>The opposition aver that even though the president and the <span class="caps">NPA</span> could go ahead to appeal to the Supreme Court of Appeal and even the Constitutional Court, the president as he has always said, must have his day in court.</p> <p>‘‘The prosecution against President Zuma must proceed & he must have his day in court as he has always claimed he wanted,’‘ the said in a tweet.</p>

The prosecution against President Zuma must proceed & he must have his day in court as he has always claimed he wanted.