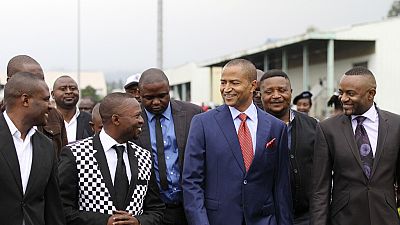 After his recent case about the recruitment of mercenaries, Congolese opposition figure and presidential candidate, Moise Katumbi, is back in court.

The former governor of Katanga province is being asked to explain himself in a property expropriation case.

A Greek citizen, Emmanuel Stoupis, accuses Katumbi of expropriating his family’s property. He says that Katumbi used his power while he was the governor of Katanga province, to grab the property owned by the deceased mother of the complainant, according to media outlet RFI.

Another case filed against DRC presidential candidate Moise Katumbi. Greek National accuses him of expropriation of a property.
On it goes.

His lawyers have however denied the charges, saying that Katumbi was in exile abroad during that time, in 1998. They said that the documents produced were fabricated and had forged signatures to discredit their client.

The building in question has been under a 40 years ownership by Katebe Katoto, a wealthy businessman and Katumbi’s elder brother.

The lawyers say that the building was rented out to Katete, who was a tenant there through the national insurance company up to 1976, when it was sold to him and still has his name under it.