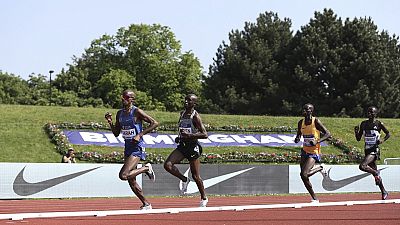 Three-time world 1500m champion Asbel Kiprop posted his third consecutive win in a record time of 3:29.33 as he consolidated his IAAF Diamond League in Birmingham pushing his trophy points to 20.

This is not far from the world record of 3 minutes 26 seconds, obtained by Moroccan Hicham El Gerrouj.

Another Kenyan, Conseslus Kipruto has already proved the man to beat in the men’s 3000m steeplechase having recorded victories at the IAAF Diamond League meetings in Doha, Rabat and Rome. The world-leading personal best of 8:00.12 he produced in Birmingham on Sunday, however, was on another level.

Kenyans also took charge of the 3000 meters steeplechase, occupying the first 6 rows of the test.

Among the ladies, the Burundian Francine Niyonsaba won the 800 meters race with results foreseen to further boost her spirit to race in the Rio Olympics in August.

Athletes and the crowd also paid their respects to Muhammad Ali with a minute’s applause as a picture of the the triple world heavyweight champion appeared on the big screen.