African citizens to get easy entry into Ghana in July 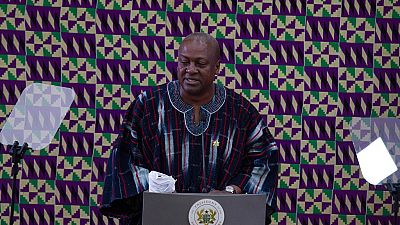 With effect from July this year AU member state citizens can travel and get visas on arrival to stay for 30 days. JDMahama #JMSONA2016

President Mahama made the declaration on Thursday, February 25, 2016 during the delivery of Ghana’s State of the Nation Address to parliament in the capital, Accra.

“With effect from July this year, Ghana will offer visas on arrival for AU member state citizens with an added option of obtaining up to 30 days visa,” Mahama said placing emphasis on fulfilling the objective of AU to bridge the gap between African citizens on the continent.

The president added that the reason for the visa on entry requirement is to validate the security backgrounds of travellers so as to guarantee the peace enjoyed in the country.

Touching on unifying the sub-region, President Mahama encouraged the study of the French language by citizens of Ghana, a country bordered by French-speaking Burkina Faso, Cote d’Ivoire and Togo. He called on the parliament to start by instituting French courses for its members.

Mahama said by being bilingual, Ghana’s association with La Francophonie will be enhanced, thereby creating a mutual trade environment and also foster participation in free-trade agreements.

Ghana’s Parliament House was filled with parliamentarians, members of government, community leaders and the general public as the president read what he termed “evidence-based” state of the nation.

The almost four-hour speech was accompanied by cheers and boos from the majority and minority sections of the House respectively.