SpaceX rocket launches 11 satellites and vertically lands back on Earth 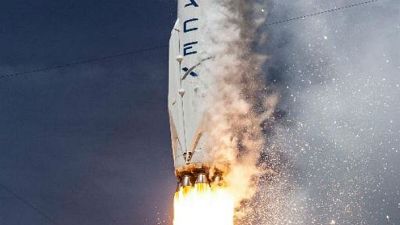 The reusable main-stage booster behind the SpaceX Falcon 9 rocket landed safely near its launch pad in Cape Canaveral, Florida on Monday (December 21) in a dramatic space flight first.

The rocket had blasted off from Florida with a payload of communications satellites.

The launch and successful return of the rocket’s first stage, followed by deployment of all 11 satellites delivered to orbit for customer ORBCOMM Inc, marked the first SpaceX flight since a June accident that destroyed a cargo ship bound for the International Space Station.

11 satellites deployed to target orbit and Falcon has landed back at Cape Canaveral. Headed to LZ-1. Welcome back, baby!

SpaceX CEO Elon Musk celebrated the launch and its landing on Twitter.

“11 satellites deployed to target orbit and Falcon has landed back at Cape Canaveral. Headed to LZ-1. Welcome back, baby!” Musk wrote.

The upgraded, 23-story-tall rocket lifted off from Cape Canaveral Air Force Station at 8:29 p.m. EST/0129 GMT, with the main stage returning about 10 minutes later to a landing site about 6 miles south of its launch pad.

Musk has said the ability to return its rockets to Earth so they can be refurbished and reflown would slash his company’s operational costs in the burgeoning and highly competitive private space launch industry.

SpaceX employees erupted in jubilation as they watched a live stream of the 156-foot-tall white booster slowly descending amid a glowing orange ball.

Minutes after blast-off, the Falcon 9’s first stage rocket separated from its upper-stage booster, which continued on into orbit to release ORBCOMM’s satellites, which will provide machine-to-machine messaging services on the ground – such as between retailers and shipping containers.

The rocket’s main stage then turned around, fired a series of engine burns, deployed landing legs, and settled itself onto a newly refurbished landing pad occupying a decommissioned missile site.

SpaceX previously experimented, unsuccessfully, with landing its rockets on a platform in the ocean.

The Hawthorne, California-based company was founded in 2002 by Musk, who also serves as chief executive of Tesla Motors Inc., the electric car maker.