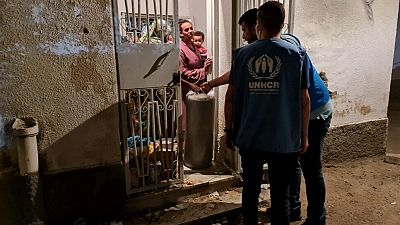 When Libyan forces swept through Tripoli’s Gergaresh neighbourhood earlier this month in a security crackdown, 17-year-old Eritrean mechanic Hamza* was caught up in the dragnet.

Arrested at his home, he was among thousands of migrants and asylum-seekers crammed into Ghot Al Shaal detention centre in unsanitary conditions, before managing to escape with others.

“It was extremely crowded – thousands of people were there. There was no washroom and food was very scarce. It was dire. Because of this, people decided to escape,” he says.

The youngster is now among a large crowd of refugees and asylum-seekers gathered outside a Community Day Centre run by UNHCR, the UN Refugee Agency, in the Libyan capital. Some have been directly affected by the recent security crackdown, having lost their homes and belongings or they have recently escaped from detention. Others have crowded in front of the CDC in the hope that they will be prioritised for evacuation or resettlement.

“We didn’t have anywhere to go to. We couldn’t go back to Gergaresh. There’s no place to go,” says Hamza.

Daily life has always been very challenging for asylum-seekers and refugees in Libya, which has been roiled by war and political turmoil for the past decade, and hit hard in the COVID-19 pandemic. The lack of a national asylum law means they are considered to be “illegal migrants” and are liable to arrest, detention and abuse.

But nothing prepared them for the events of this month. In the widespread crackdown launched on 1 October in Hai Alandalus municipality – which includes Gergaresh – security forces demolished unfinished and makeshift houses sheltering asylum-seekers and migrants. At least seven people were reportedly killed during the operation in the following days. This week, a Sudanese asylum-seeker was killed on the streets of Tripoli, after being beaten and shot.

Many vulnerable asylum-seekers and refugees have lost their homes, possessions and livelihoods in the ongoing crackdown, and say they now have no safe place to go in Tripoli.

“Wherever you move there are checkpoints,” says Hamza, who has been unable to return to his job as a mechanic. “We fear being arrested again and put in detention. Movement is very difficult,” he said.

Maha*, a 21-year-old Sudanese asylum-seeker, was briefly held at Ghot Al Shaal detention centre and has joined others in front of the UNHCR’s Community Day Centre. “It’s dangerous to move. I’m afraid I’ll be arrested again,” she says.

UNHCR and partners at the centre initially provided emergency cash or prepaid cards, food and hygiene kits to urgent cases, but were forced to temporarily suspend CDC operations amid escalating tensions as large crowds of people gathered outside the building.

Some of the most vulnerable are provided with assistance through outreach activities in locations where shelter has been found. At one urban location in Tripoli this week, asylum-seekers were provided with food parcels, cash assistance and replacements for lost UNHCR documentation.

“This food will help me for a while and I’ll share it with others,” says Hamza.

Emergency cash assistance is helping to meet some basic needs, but asylum-seekers whose homes were demolished say average rents have now more than doubled, and options are limited as many landlords are frightened to rent to foreigners.

Under UNHCR’s caregiver programme, temporary shelter was provided by other asylum-seekers to some of the most vulnerable, including single mothers, unaccompanied children or people with medical issues. But many caregivers and community volunteers were themselves caught up in the raids, displaced or put in detention, while others simply struggle to meet the surging needs.

“Today, we are almost 30 in my house, and we are doing our best to provide food to everyone, but we’re running out of money and supplies,” said Fatima*, a Sudanese asylum-seeker and caregiver. Initially sheltering three people, she has now taken in another 21 people, including five children.

“Many vulnerable families reached out to us begging for shelter. I’m hosting many Eritreans who escaped from detention. One of them has been crying for days, unable to eat, drink, or even sleep. Guards at the detention centre began shooting at them and killed one of his friends,” she said.

UNHCR is calling for the release of refugees and migrants and an end to arbitrary detention, as well as respect for their human rights and dignity at all times. However, amid the anguish and turmoil, long-term solutions are urgently needed.

Humanitarian flights out of Libya provide a vital lifeline to the most vulnerable. But for much of this year, they were suspended by the Libyan authorities, despite UNHCR repeatedly urging for their resumption.

The suspension has meant that some resettlement countries have informed UNHCR that they can no longer receive submissions from Libya this year. This will result in the loss of 162 places on direct resettlement flights and could jeopardize nearly 1,000 places through the Emergency Transit Mechanism, which provides vital respite in Rwanda and Niger for vulnerable refugees and asylum seekers while long-term alternatives are sought.

There is a long list of desperate people who have already been selected for the flights.

Without these solutions, many asylum-seekers are left with no alternative but to risk all on dangerous sea journeys across the Mediterranean or to remain in Libya and be exposed to accute risks of abuse, exploitation or destitution.